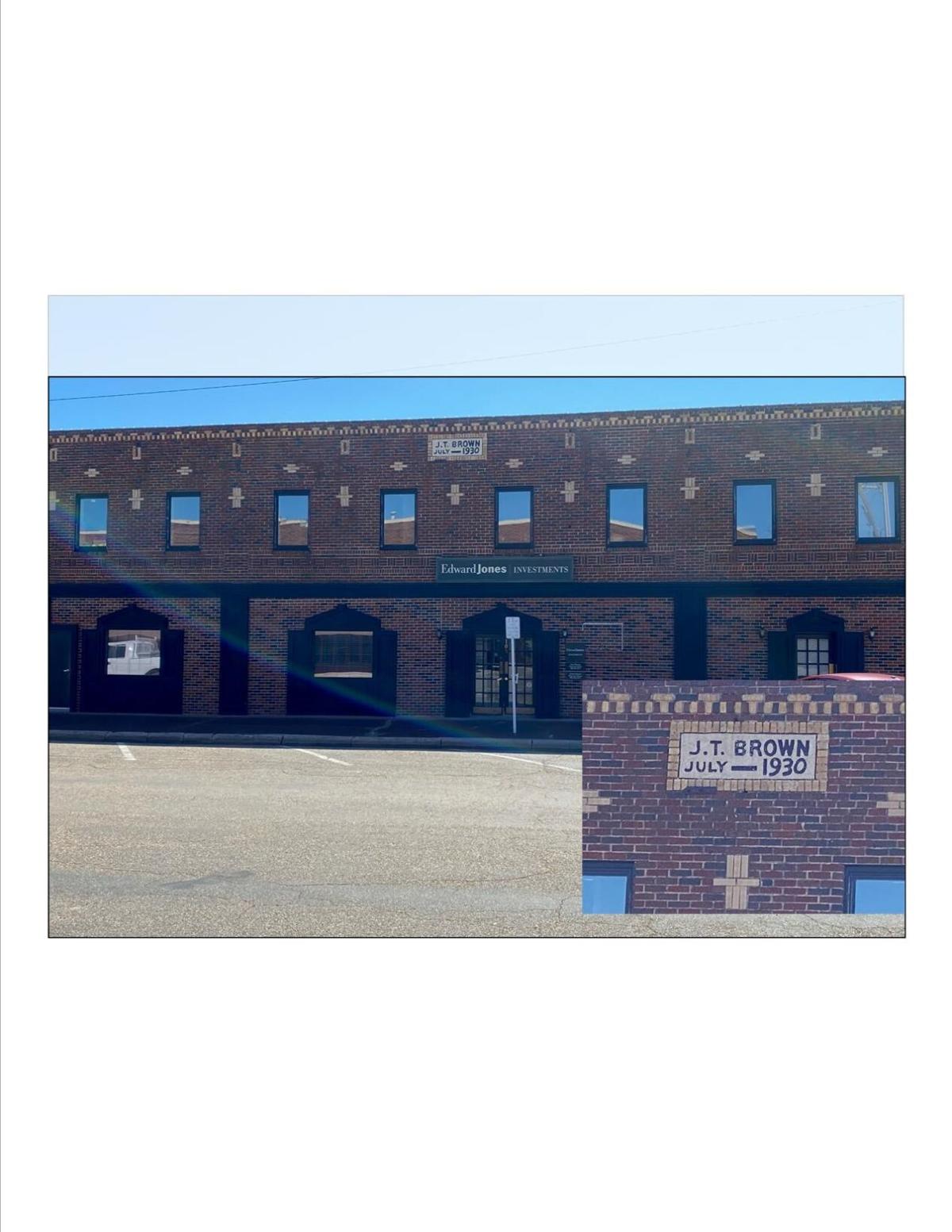 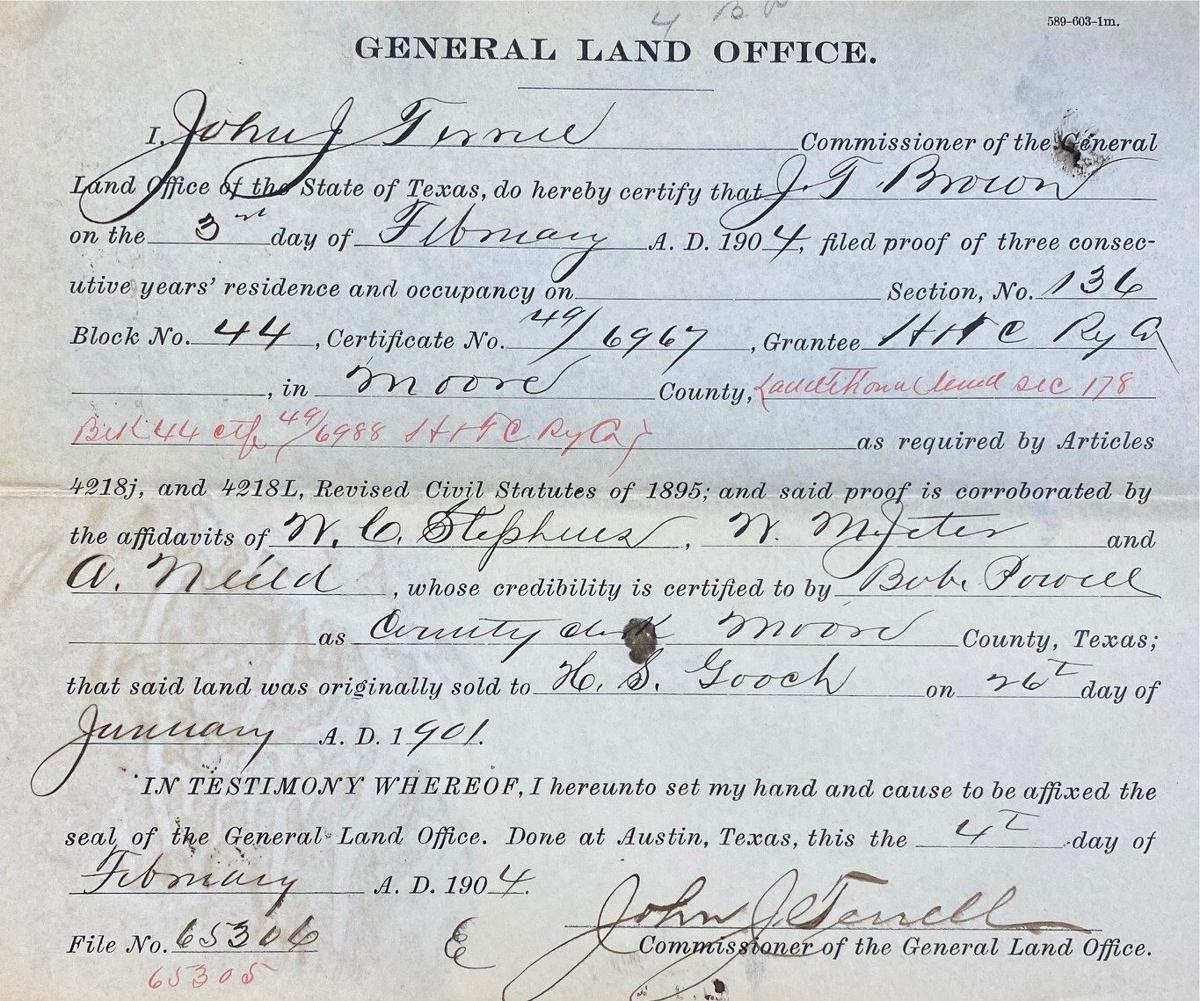 One of the buildings downtown has a name on the top -- “J. T. Brown” named after the man who came to Moore County with his family in 1901.

J. T. and Mary Molly Davis were married in 1875 in Georgia. They had six children, Sally, Erwin, Henry, Smith, Charlie, Blanch.  In an interview with Louise George, a grandson of J. T. who is also named J. T. tells, “My grandparents came up here to Channing on the Fort Worth and Denver train with all their household goods and their horses and buggies and wagons and what have you. Everything they owned come up on that train to Channing.”  The family had been living in Tarrant County.

They setled on a farm in the Middlewell community.  He built the first school house in the community so his children and other children in the area would be able to attend school.  It was a one room building.  Harriet Orton was the first teacher and then Fred Makeig.

Brown started in the merchandising business in a store located on the northeast corner of Dumas Ave. and Seventh Street. The store was an old wooden building, but was replaced in 1937 with a new brick building.  Brown called the store a drug store, but it sold materials, work clothes, tobacco as well as medicines.

The grandson remembers that his granddad even sold ice.  “He had a great big chest in the back, right in the middle of the floor.  It was a great big thing.  He had an old model T truck and my dad or somebody would go to Dalhart and a get a load of ice and put it in the store for people to buy.  It came in 100 pound blocks and somebody had to break it up if people just wanted 25 pounds or so.”

The younger J. T. tells of his grandfather and his car. “One thing about my grandfather was, he never did learn to drive a vehicle.  He couldn’t even drive that truck he owned.  He bought a brand new car.  It was a Stevens car, the only one I ever heard of before that or since.  It was a red car, quite an up-town car.  He bought this car, but he couldn’t drive a lick.  I never will forget, he had a big barn out there where he lived, and they put this car in that barn.  They thought then that the weight of the car was hard on the tires.  They had four jacks and they wouldn’t clear the wheels, but it would take some of the weight off.  They left it setting on those four jacks until they got ready to go somewhere.”  When the Browns needed to go somewhere in the car, they would ask a neighbor to drive for them.  Later a son learned to drive.

Young J. T. was the son of Charlie.  He was remembering life on the farm in the interview with Louise George.  “At first, Mother used coal to cook with and I guess we went from coal to gas.  I don’t remember having any butane.  Mother was real happy to get the gas.  That was something else – having that gas.” He tells of his mother getting a carbide iron.  “that was out of this world for her to use that iron instead of hearing them old flat irons on the stove.  It had, oh, I don’t know, about a ten foot tube that was plugged in the wall.  She’d iron up a storm with that carbide iron.  She got one of the first washing machines that was in this part of the county and it was a Maytag.”

The Brown children went to school in Middlewell and then to Dumas.  Young J. T. relates a story about his first day going to school in Dumas, “I remember my first morning going to Dumas Schools when I was starting the eighth grade.  I was to ride my bicycle up the road here two miles and catch the school bus that came right by there.  But, I missed it.  It had done run.  I had got a late start or something.  Anyway, I decided, well heck, I’m not going to miss the first day of school.  So, I just rode my bike on in to school which was about ten miles and there wasn’t any roads whatsoever, just a cow-trail all the way into town.  So, I rode my bicycle all the way into town.  I was pretty well used up that night.”

In the interview, the young J. T. remembered his first bank loan.  He tells about an airplane came right over the school house just before noon.  He was in study hall on the second floor of the building.  “We all hit that fire escape, all of us who were upstairs.  Mr. Reed, the superintendent was an aviator and he was right along with us.”  The pilot decided to give rides to those who wanted to go.  The plane was going to circle Stratford, then come back to Dumas.  The cost would be ten dollars.

“Well, I didn’t have no ten dollars in my pockets.  So, I run down to the bank and Mr. Morton he was sitting back in his little office and he said, “Come in, J.T. What can I do for you?”  I told him I needed ten dollars awful bad to ride that airplane.  He said, “Well, I’ll loan you ten dollars.” And, he fixed out a ten dollar note.  I signed the note and took the ten dollars and stuck it in my pocket and got back to the school just as quick as I could, but it was too late.  They done had a load and they went ahead without me. So, I missed my flight on the airplane.”

According to the interview, the first theatre was owned by Charlie Bennett and a depot agent in Channing.  “It was right there on the corner where that brick building we were talking about was built. It was an old wood building then, of course, and that’s where the picture show was.  That was in the old days, the silent days.  I could operate those silent machines.  Then we had a piano that set about half way down the theatre.  It was a self-playing thing, but you had to pedal it.  I’d have to go down and play that thing for a while to make some music.    They didn’t have music to go along with the movie, just something to make noise with.”

He remembers the first talking films.  “We put in the first talkie films here.  We operated the silent films until the talkies came in.  They wasn’t anything like they are now because then, with a talkie you got your regular film just like the old silent films and they sent you a big record, a big round phonograph record.  You had to get everything just in time to get it all started out together for their voice to correspond with the way they were talking on the screen.”

The theatre was sold to Bob Powell and Mutt McMurry.  They moved it down the street and across.  It was called the Star Theatre.

The building on the Northwest corner of Dumas and Seventh was known for many years as Brown Drug, but J. T.’s interests were varied and helped the community grow. That building that he built ninety years ago is still being used today.