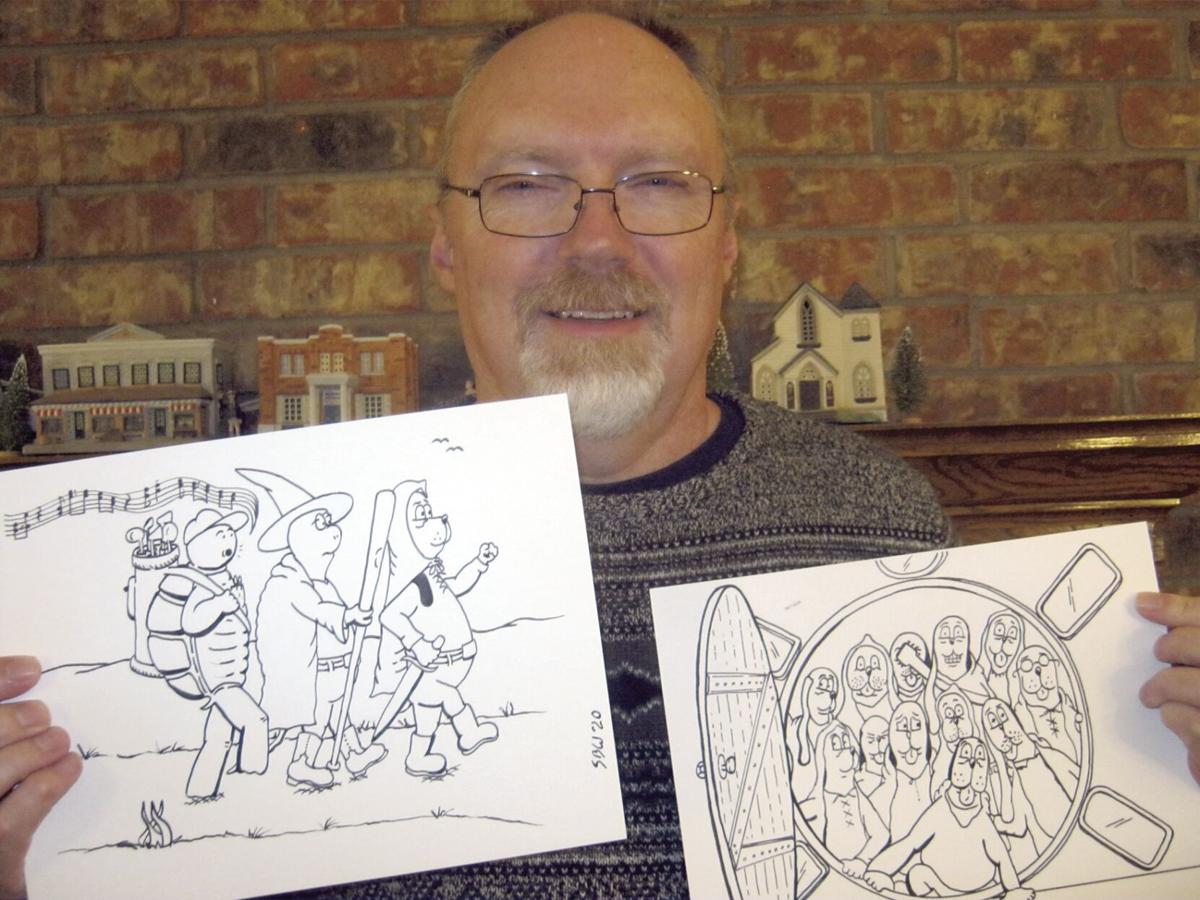 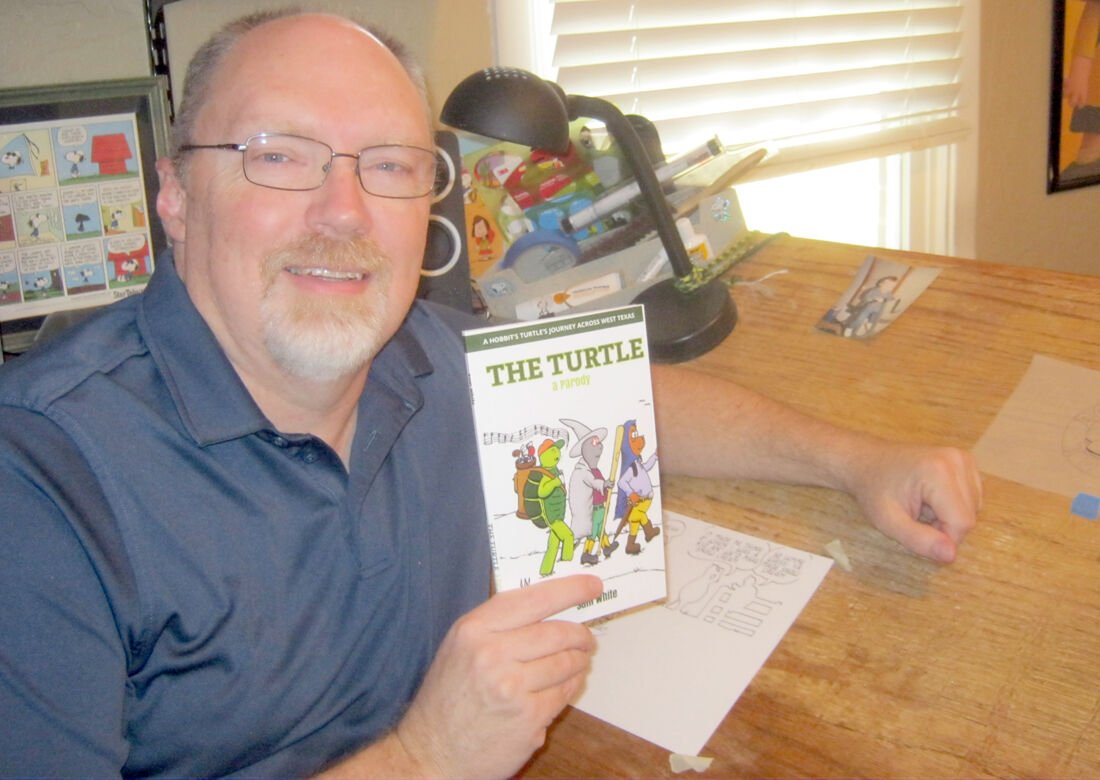 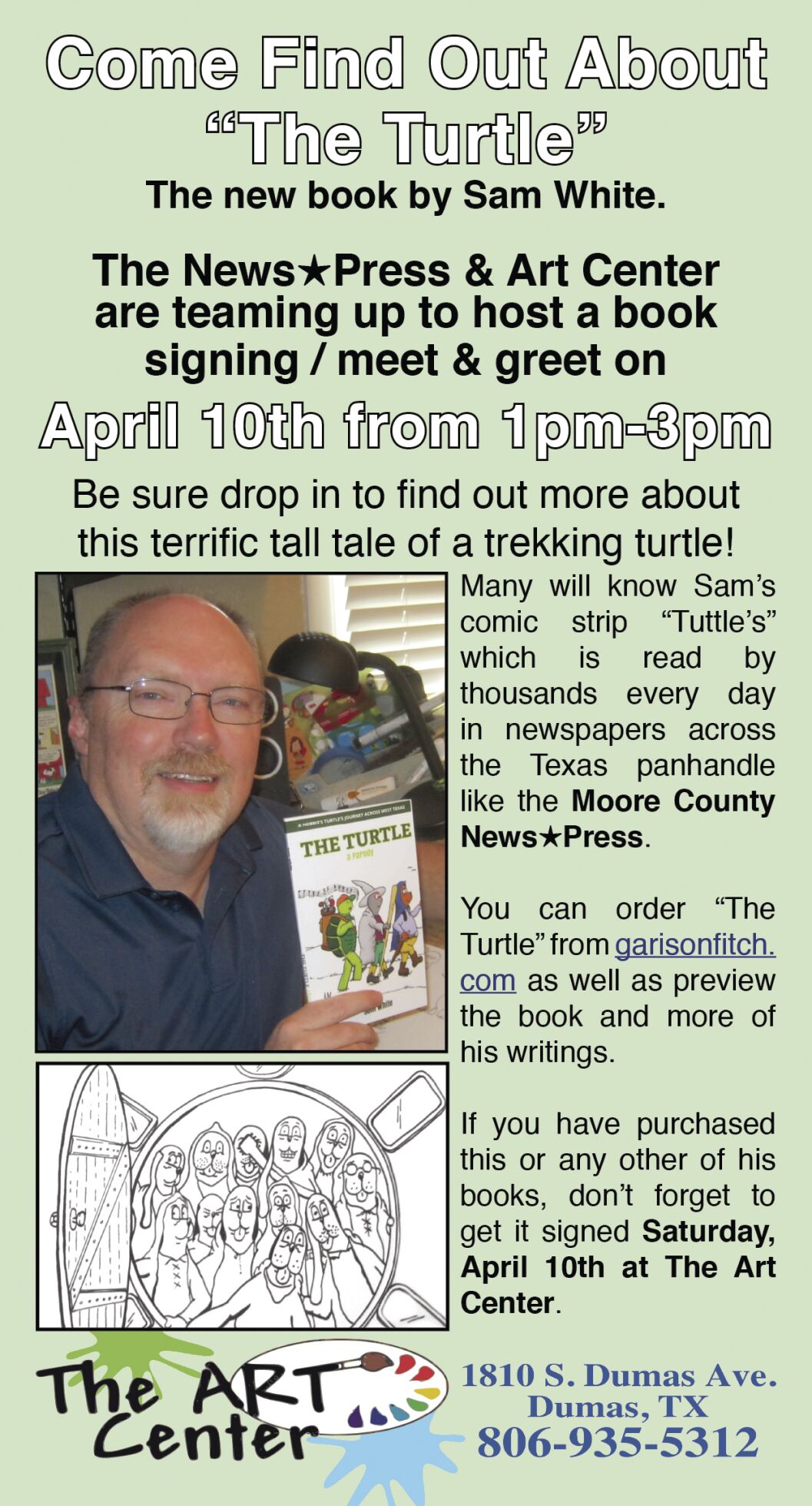 Comics have long been a part of Sam White's life. The former Dumas minister and Memorial Home Health and Hospice chaplain, who now serves as a hospice chaplain in Amarillo, has been drawing comic strips since the first grade. His work has been featured on the Entertainment pages of the News-Press for over a decade through the comic strip "Tuttles". Now, White is the author and illustrator for a new book called "The Turtle".

Fans of "Tuttles" will find many familiar faces in White's latest project. "The Turtle", which is a parody of "The Hobbit", features the characters from his comic strip. However, they are drawn with more detail and at a different scale than in the comic strip, White said. And, he added, "with all new pens."

White's latest project was inspired by the work of "the great Walt Kelly, who drew the comic strip 'Pogo'… (He) used to do these bits where his comic strip characters would act out famous fairy tales and completely wreck them. They were hilarious and I always wanted to do something like that," White said.

It was about three years ago when White says he "started getting a little more serious about the idea… and started trying to think of a story that was well known enough that people would 'get' the parody." He added, "I am a huge JRR Tolkien fan and one day I had this picture in my mind of Tuttle the turtle sitting in front of his house and whittling when Picadillo the armadillo walks up dressed like Gandalf."

Fast forward a year and White says he attended a retreat, got a really cool spiral notebook and wanted to put something in it. That's when he says he started writing "The Turtle".

White said it took about a year to write the book.

"It took about a year to write, partly because I was doing like Tolkien and reading it out loud to my sons (and getting feedback)," White said. "So, maybe 8-9 months to write, then 3-4 months to do the illustrations."

White's first comic strip dates back to when he was in the first grade. He said, "I used to draw a strip for my family I called 'Funny Bunny'. Not sure if he was actually funny or if it was funny in the sense that a kid who couldn't draw or spell drew it."

His love of comics began before then. In fact, he says when he was little he would get his family to read to him from the funny papers, especially on Sunday.

"They didn't want to read 'Pogo' to me, which I thought was because it must be naughty. Turns out it was because the dialogue is just asking for sprained tongue!" White said.

Growing up, White says the first comic strip he remembers reading is "probably 'Peanuts" by Schulz. I know we had some of the paperbacks around the house, as well as some of 'Dennis the Menace'.

When asked about his favorite comic strip outside of his own creations, White responded, "Peanuts, without a doubt. My life and office are decorated in Charlie Brown and Snoopy. I have the entire 50 year run of the strip in hardback, as well as posters, rugs and figures."

White certainly has maintained his love of comic strips throughout his life, as is evident by his continued work on "Tuttles" and his new venture, "The Turtle".

When asked if his "Tuttles" characters are based on any real life individuals he said, "Not really. I think each of the characters has exhibited foibles or downright annoying traits of people I know or work with, but no character is patterned after one person."

Don't miss those "Tuttles" characters on their latest adventures in "The Turtle". When asked if this is a book the whole family can enjoy, White said, "One of the tag lines I thought about for the cover of the book was 'A children's book for adults', which is what I was going for. I think this book will be enjoyed by all. I think kids will like the artwork and the adventure, but I think there are a lot of jokes that only the adults will get — not 'adult jokes', just maybe over the kids' heads."

Anyone interested in finding out more about the book or visiting with the author should plan on attending a book signing/meet and greet event set for April 10 from 1-3 p.m. at The Art Center in Dumas. You may also visit garisonfitch.com to find a link to purchase the book, as well as to read a sample chapter.