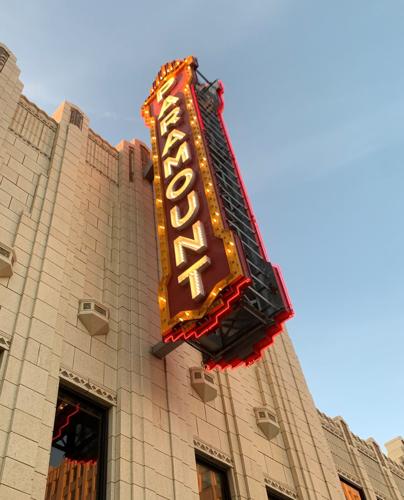 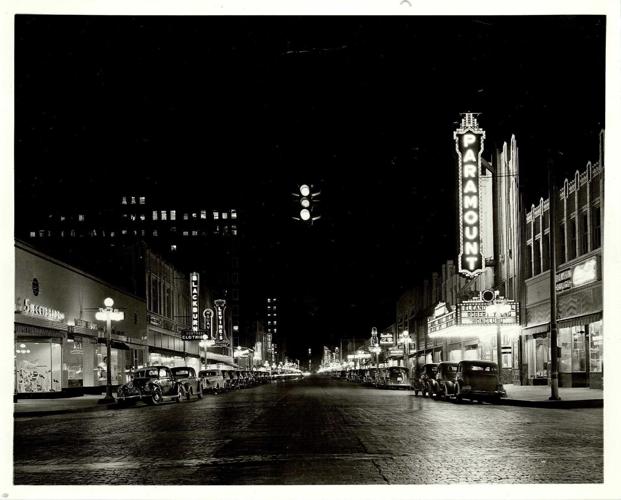 AMARILLO (Aug. 25, 2022) – Center City of Amarillo, Xcel Energy and SkyRite Signage Co. have teamed up to brighten downtown Amarillo’s iconic Paramount Theater sign in celebration of the 90th birthday of the sign and the historic Paramount Theater Building at 817 S. Polk St.

Center City, through its façade grant program, has matched a gift provided by Xcel Energy to replace all 850 incandescent bulbs with energy-saving and long-lasting LED bulbs installed by SkyRite at a steep discount. The LED project is part of an effort to update the sign, which was restored 16 years ago.

“The Paramount sign is an icon of not only downtown but for all of Amarillo,” said Charles Lynch, president of the Amarillo Historical Preservation Foundation, which restored the sign with Center City’s help in 2006. “It’s a throwback to a time when Polk Street was brilliantly illuminated with neon from end to end, and it’s a striking symbol of a downtown redevelopment effort that is paying off big for Amarillo. We’re grateful for Center City, Xcel Energy and SkyRite for investing in the future of one of our most treasured landmarks.”

The 30-foot blade-style sign is trimmed in red neon but most of the illumination comes from the 850 yellow and clear flashing bulbs that spell out the Paramount name on two sides and animate the borders. According to Xcel Energy, switching to LED bulbs provides a brighter light that uses 75% less energy, and the bulbs last up to 15 times longer. This will reduce both the monthly cost of lighting the sign and the annual costs of sending a repair crew to change burned-out bulbs.

“Our 1943 annual report called Polk Street the ‘best lighted Main Street in America’ and featured a night view of downtown dominated by the Paramount sign,” said Brad Baldridge, Xcel Energy director of Customer and Community Relations. “Almost 80 years later we’re still proud of Polk Street, and the Paramount sign is a great advertisement for the benefits of LED lighting.”

The sign is one of the few remaining relics of the original Paramount Theater, an art deco landmark that opened April 21, 1932 in the throes of the Great Depression. After the theater closed and was converted into an office building in the 1970s, Amarillo businessman Lowell Stapf salvaged the sign and other theater fixtures and reinstalled them at the Paramount Club on Northeast Third Avenue and Osage Street. Stapf donated the Paramount sign to the AHPF in 2005.

AHPF and Center City worked together in raising funds from the community, local foundations and Amarillo businesses – including Xcel Energy – to hire Wellborn Sign Co. to restore the sign and reattach it on the Paramount Building in time for a public unveiling at the Center City Block Party in August 2006. Wellborn Sign has since merged with SkyRite, and some of the sign workers who restored the sign in 2006 have been involved in the LED retrofit.

"The restoration of the iconic Paramount sign was a catalyst project for our downtown,” said Beth Duke, executive director of Center City of Amarillo. “The sign became an instant landmark and inspired others to revitalize Center City. When you see the Paramount sign, you know you've arrived in historic downtown Amarillo.”

Duke played a leading role in the fundraising effort in 2006 and secured a $40,000 Center City grant with funds from the late Elaine Shults to help pay the restoration cost. Other large donors were the Sybil B. Harrington Trust, the Ware Foundation and Xcel Energy. But Duke pointed out that individual donations through the “Buy a Bulb” campaign were vital to the project’s success.