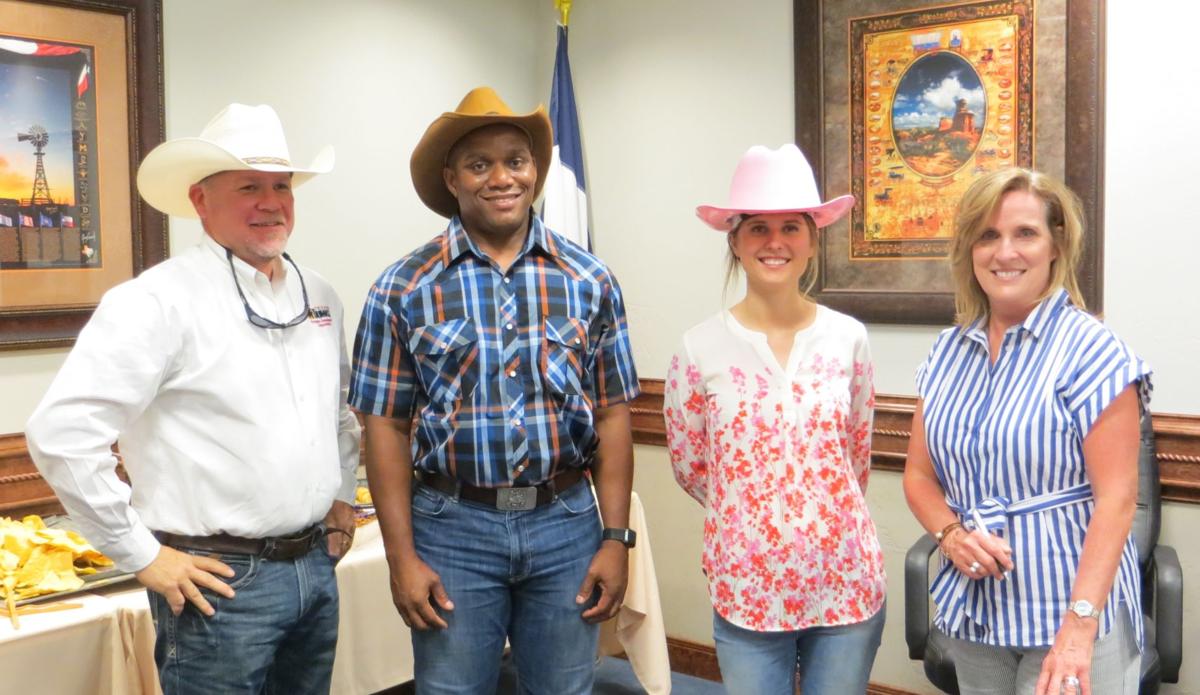 Lester Thornhill came to the United States from Trinidad to attend college.  Sasha Stephens immigrated from the former Soviet Union as a middle schooler.  Today, Thornhill is the chief executive officer and Stephens the executive project manager of Life's Abundance, Inc., a Florida-based company that makes dog food and a variety of other products for both humans and pets and was recently named by Forbes Magazine to its list of "The Best Small Companies of 2019."  They were in Dumas Friday to break ground on a new distribution and customer care center in the Dumas Business Park that, according to Dumas Economic Development Corporation (DEDC) Executive Director Michael Running, could have a 10-year economic benefit to the local area of $4,400,000.

Life's Abundance has had a small, leased facility in Dumas for a few years.  "We were looking for a facility to serve customers in this area," said Stephens.  People order Life's Abundance products on the company website or call customer care, and the company ships the products to the customer, or the customer can pick them up at the nearest warehouse.  Stephens, who began in customer care before working her way up, said that they had looked at sites in Dallas and elsewhere, but none had really worked for them.  Then they saw an email that Running had sent to companies touting the benefits of Dumas as a destination for business.  "Everyone said, 'Where is Dumas?' "  After some phone calls and a trip to see for themselves, the company moved into an existing facility that Stephens said they thought would meet their needs for a while.  "This area has worked out for the shipping speed and cost."  But "sales increased in Texas faster than we anticipated," she said, and the company found itself rapidly running out of room.

Unfortunately, there was not an existing facility in Dumas large enough to meet the company's need for space.  Amarillo was another story.  Plus, Amarillo would offer cheaper transportation costs than Dumas.  Though Thornhill said he wanted the company to retain its presence in Dumas, the cost of building a new facility would be over $2 million.

After negotiations between the company and the DEDC, the DEDC agreed to, and the Dumas City Commission approved, an incentive package to help defray some of the costs of Life's Abundance building a new facility in Dumas.  The DEDC will give the company a five acre parcel of land in the Dumas Business Park worth $150,000 and pay $20,000 in pre-engineering and other costs. The city will provide an annual 65 percent reimbursement of the local sales tax money collected by the firm for 10 years, not to exceed $500,000.  The new facility will be the distribution center for Texas, New Mexico, Oklahoma, and much of the rest of the center of the country.  The customer care call center will be double the size of the old one.  Thornhill and Stephens say there is a possibility that the company could expand its operations in Dumas into packaging in the future.  Running says Life's Abundance makes a positive contribution to the Dumas economy and is the type of company the city and area need.

Before turning dirt Friday, Thornhill talked to the audience assembled for the groundbreaking about the values of hard work, staying humble, and taking care of people that he said were shared by the company and the people of this area.  He said Life's Abundance was committed to being a good corporate citizen, and he felt this area was a "good fit" for the company.  "I am looking forward to being here for decades to come," he said.

Life's Abundance started in a loft above a garage, said Thornhill.  He had been out of college a few years when he met Denis and Carol Berardi in the late 1990's.  They had been in the business world for several years, and they were interested in forming a company that would retain the things they liked about that world while eliminating those they didn't.  They wanted to start a different kind of company.  "They had a crazy idea to have a company that helps people and pets at the same time," said Thornhill.  He was willing to get on board.  By 2008, he was named president and chief executive officer.  Thornhill says the company has been able to grow steadily (20 percent last year) while maintaining a commitment to the values it was founded on.  "We are 100 percent employee owned, so the employees get 100 percent of the company's success," he said.

Life's Abundance products have never been recalled by the Food and Drug Administration.  Thornhill points out that when the FDA recently recommended to pet food manufacturers that they begin adding taurine to their food to help prevent heart problems in pets, Life's Abundance didn't have to bother.  Taurine had been in the company's formulation from the beginning.  "I think what differentiates us from other companies is that we are private.  Our purpose is improving the health and wellness of families.  Our purpose is not making money.  We make money, but it is just a barometer of how many families we help.  The more families we help, the more profit we make.  That basically allows us to have a formulation philosophy that says if it is good for the pet, we are going to do it.  If we were really motivated by profit, there are a lot of things we do that are very, very stupid. But if we actually care about the health of pets, we are doing things right."