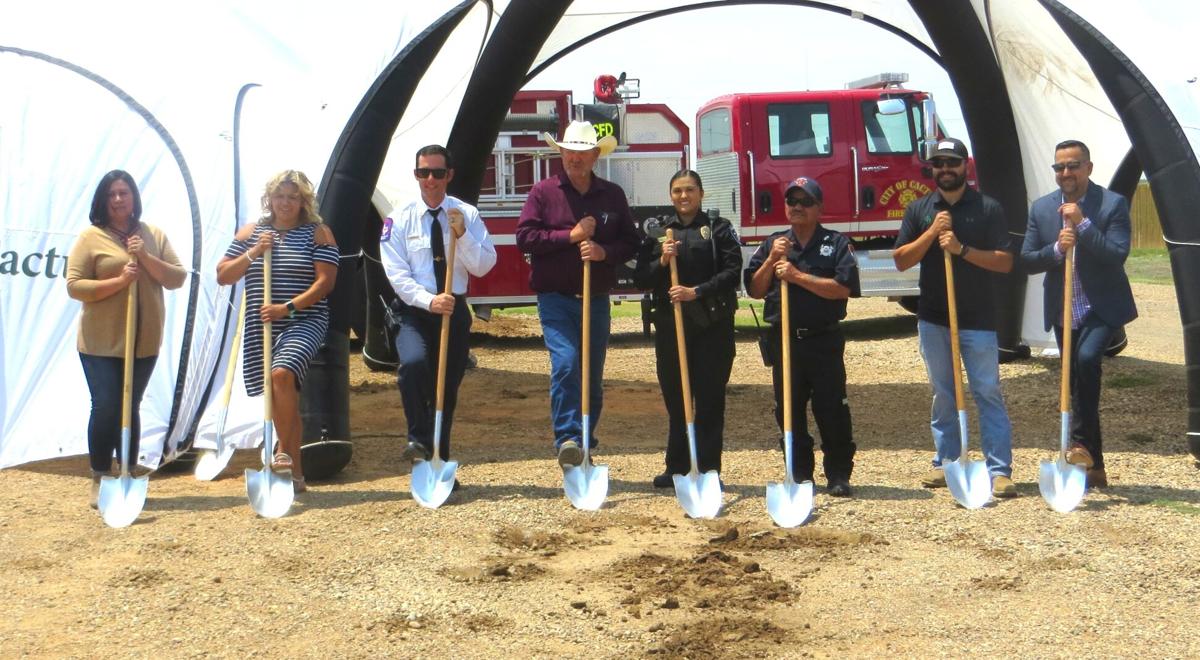 Cactus city officials break ground Tuesday to begin construction on an expansion of the city's fire station.  The station had to grow to keep up with the increase in fire and emergency services now offered by the city in the wake of the COVID pandemic.

Cactus city officials and JBS administrators break ground Tuesday to begin construction of a new aquatic park in Cactus.  JBS contributed $500,000 to the more than $3 million project.  The park is expected to be open by Memorial Day 2022.

Cactus city officials break ground Tuesday to begin construction on an expansion of the city's fire station.  The station had to grow to keep up with the increase in fire and emergency services now offered by the city in the wake of the COVID pandemic.

Cactus city officials and JBS administrators break ground Tuesday to begin construction of a new aquatic park in Cactus.  JBS contributed $500,000 to the more than $3 million project.  The park is expected to be open by Memorial Day 2022.

"Cactus is growing," said Cactus City Manager Aldo Gallegos Tuesday.  He was speaking to a group of City of Cactus employees, JBS and Moore County officials,  Cactus residents, and others who had gathered in a vacant lot between the recreation center and Catholic Church in Cactus to break ground on a new aquatic center that will replace the antiquated and worn-out swimming pool that now longer met the needs of a population in Cactus that has grown by more than 30 percent in the last decade.

The groundbreaking begins construction on a project that Gallegos said the Cactus City Commission and mayor have been saving for for many years.  The new aquatic center will provide much-needed recreational opportunities for the population, and it marks the continued resurgence of a little city that a few years ago seemed headed for extinction.

In addition to the money saved by the city, the Texas Parks and Wildlife Department  (TP&W) awarded Cactus a $500,000 grant to help pay the $3.2 million cost of the center.  JBS USA, which is the largest employer in Cactus and Moore County at its JBS Cactus beef packing plant, matched the TP&W grant with $500,000, and the project was ready to go.  Gallegos said work would begin next week and should take nearly a year.  He said Cactus officials are hoping for a Memorial Day 2022 opening.

"I am extremely excited for our community, for JBS, our employees, just super excited for this area that we are going to be able to do all this for families, to create a better environment … just a very exciting time," said JBS Community Relations Talent Manager Donna Estrada Tuesday.

The aquatic park will not be the only new recreational facilities in the area.  According to Gallegos, the city has been awarded a $400,000 TP&W grant to help pay for a new park in the vicinity of the aquatic center.  The money, which has to be matched by an equal amount from the city, will pay for lighting, walkways, landscaping, volleyball courts, and, reflecting the cultural diversity of the population of Cactus, a Sepak takraw court.  Sepak takraw is a form of kick volleyball played by Burmese and other Asians.

Tuesday was a day of groundbreaking in Cactus.  Once the ceremony for the aquatic center was finished, everyone moved to the fire station to break ground on a 4,000 square foot expansion of the living area, kitchen, showers, and vehicle and equipment bays.

The fire station was built a few years ago as part of the new city hall.  At that time, the department consisted of a full-time chief and volunteers.  During the COVID pandemic, when JBS and Cactus were especially hard hit, Gallegos said it became clear that Cactus needed more full-time, EMS (Emergency Medical Services)- certified firefighters.  Now, Cactus Fire Department Chief Tim Nicholson has three full-time firefighters, in addition to 20 volunteers.  He, his full-time firefighters and some of the volunteers are EMS certified.  They are able to respond to patients as soon as a call for help comes in and have them prepped and ready to go by the time an ambulance arrives from Dumas, cutting the time nearly in half between when a call comes in and a patient is receiving care at the hospital in Dumas.

The fire station is now manned 24-7.  Full-time firefighters work 24 hour shifts with 48 hours off.  As Nicholson said Friday, firefighters spend a third of their lives in fire stations.  The current station only had one makeshift bedroom and very limited living facilities.  When the city commission decided to bring on full-time firefighters, they knew they had to upgrade the station.  "They said, 'Let's make it right.  Let's make a true firehouse out of it,' " said Gallegos.  The commissioners paid for the project out of money they had saved for such projects.  Work on the fire station begins next week and should be completed in six to eight months.

Nicholson said his firefighters were excited by the project.

Gallegos told the crowd at the fire station, "I am just happy that we are able to do this.  It just speaks to where Cactus is headed … two groundbreakings in one day.  I'm super excited."