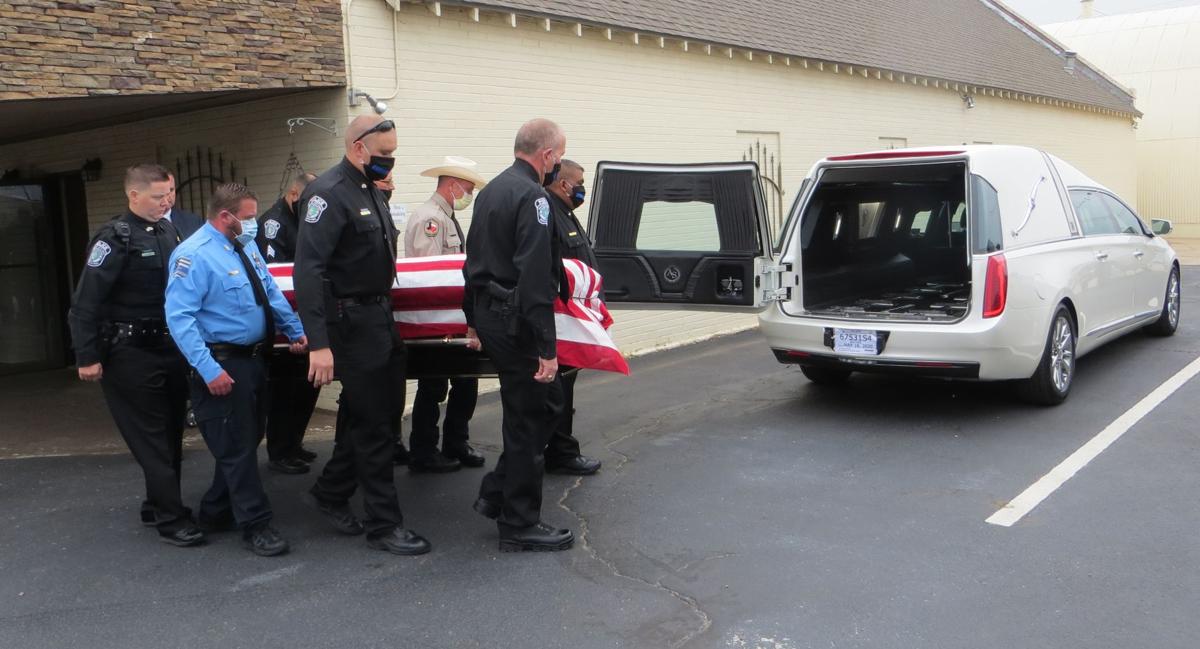 Law enforcement officers from Dumas and Moore County carry Chief Marvin Trejo to an awaiting hearse Friday to begin the journey from Dumas to Amarillo and the chief's final resting place. 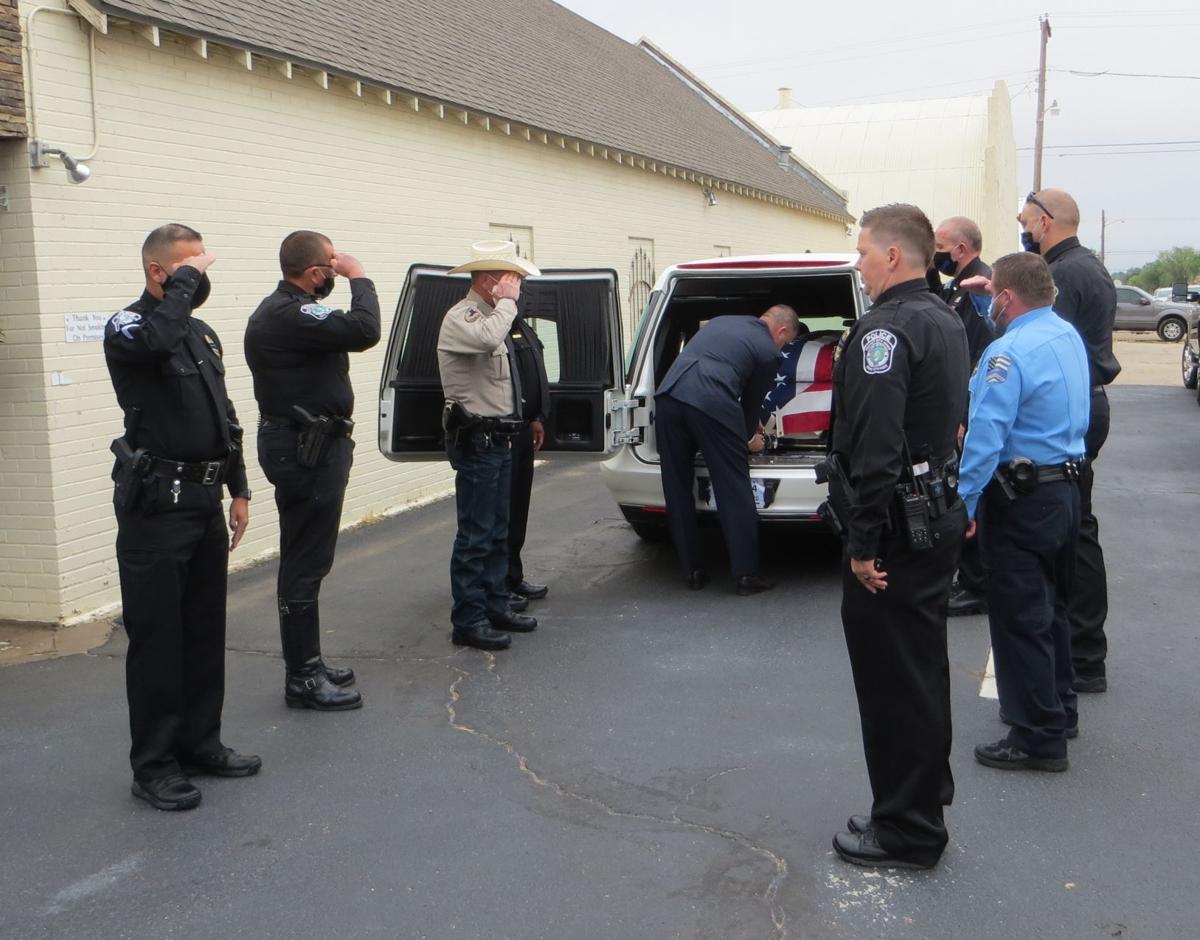 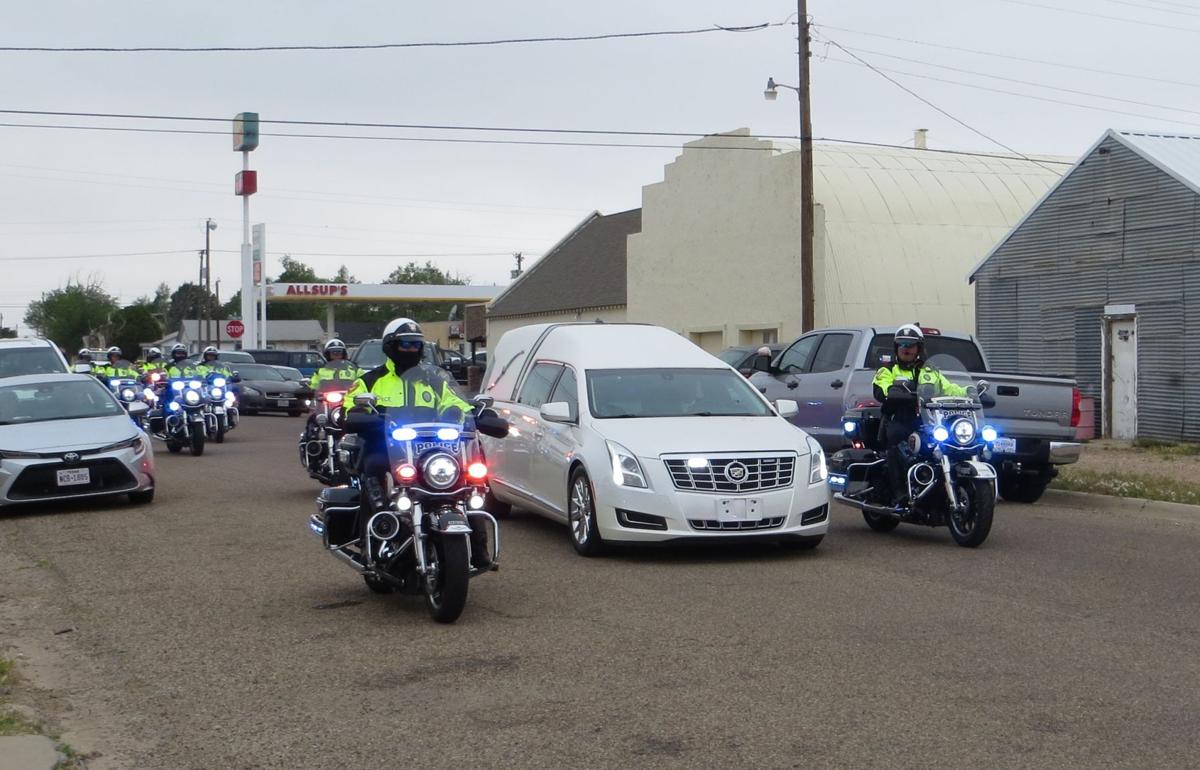 Escorted by an honor guard from the Amarillo Police Department, Chief Marvin Trejo and his family are taken for one last trip to the Dumas Police Department station before setting out on the trip to Amarillo for services and burial. 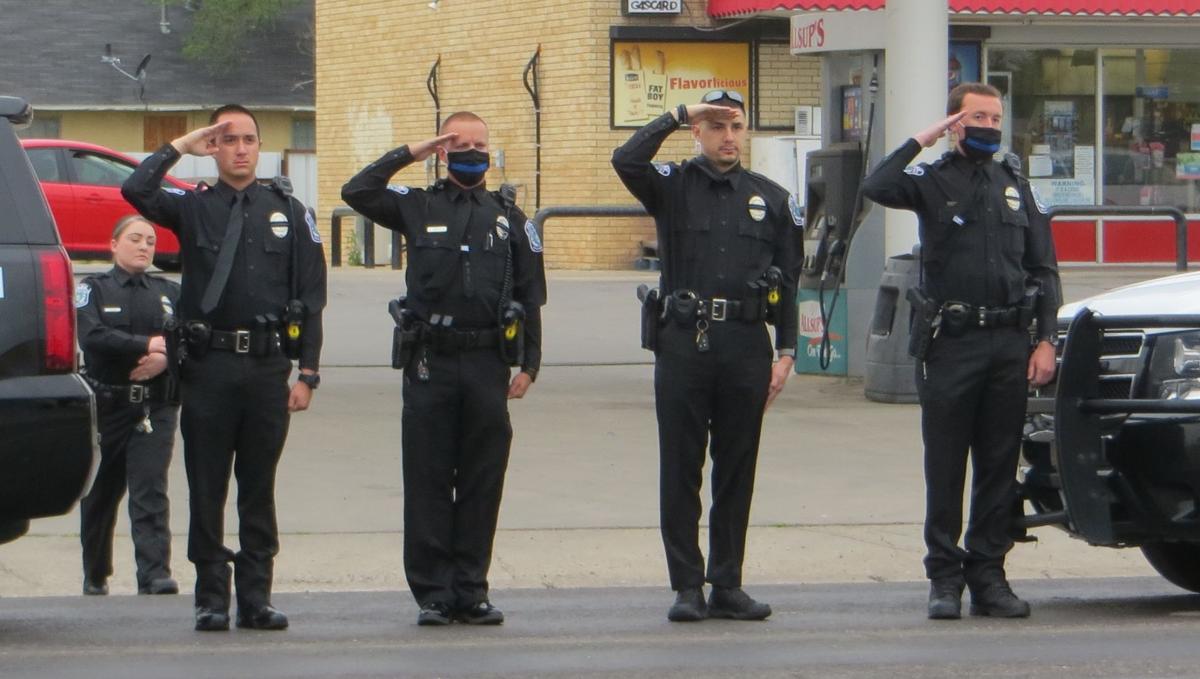 Officers of the DPD pay their final respects to Chief Marvin Trejo. 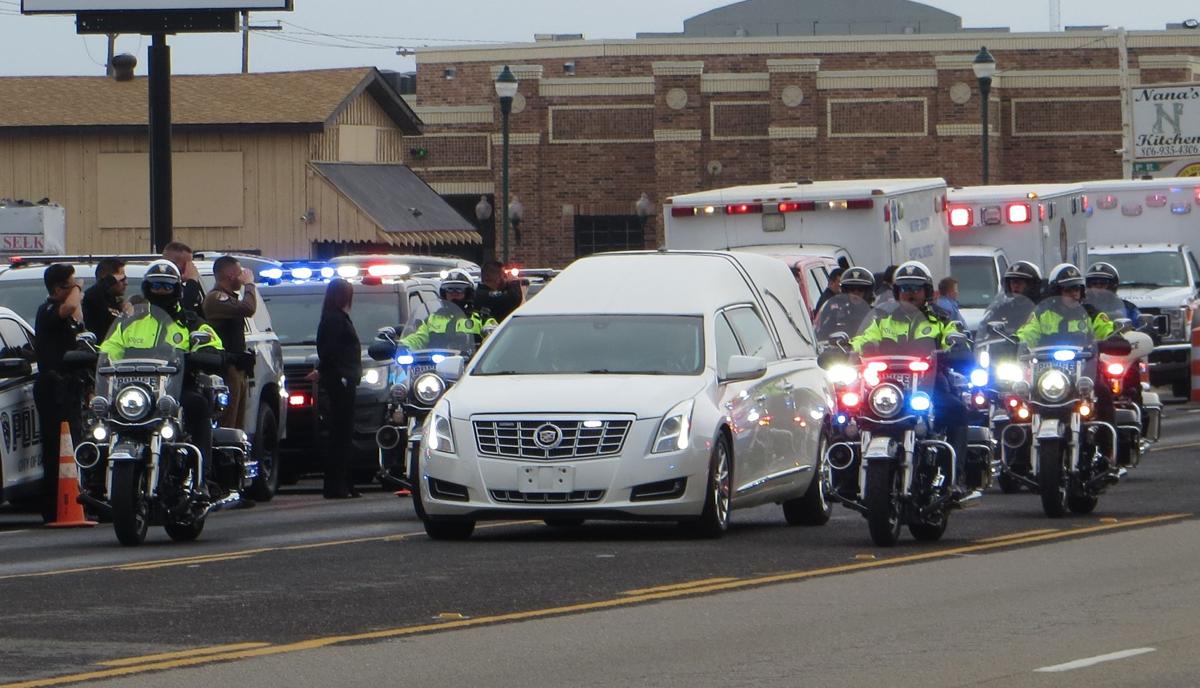 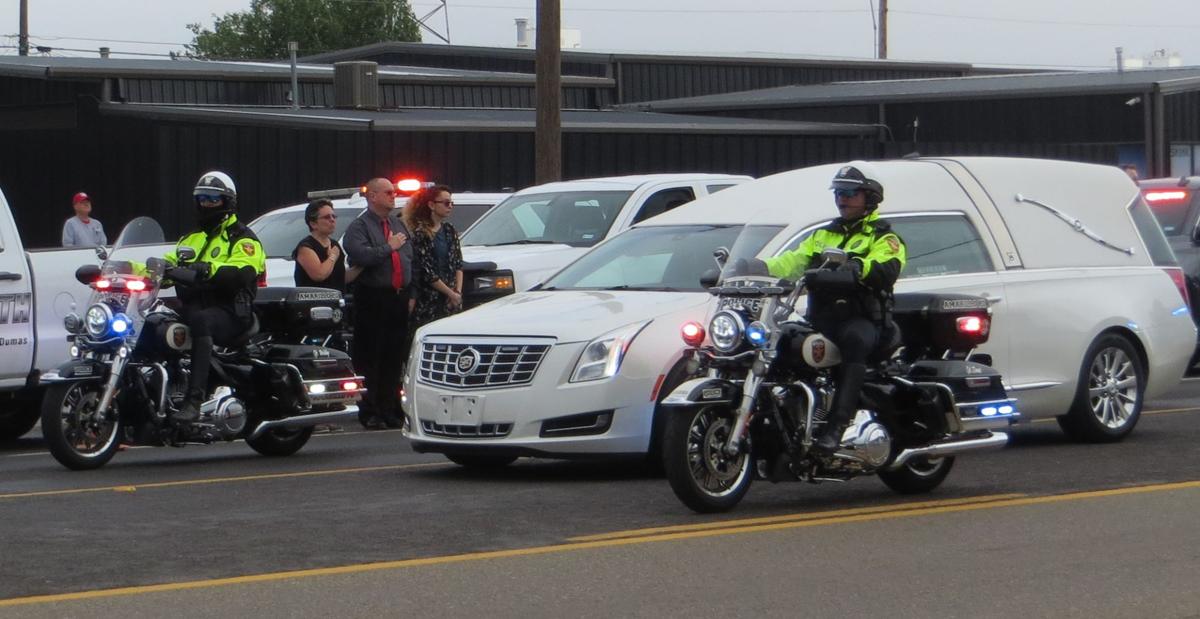 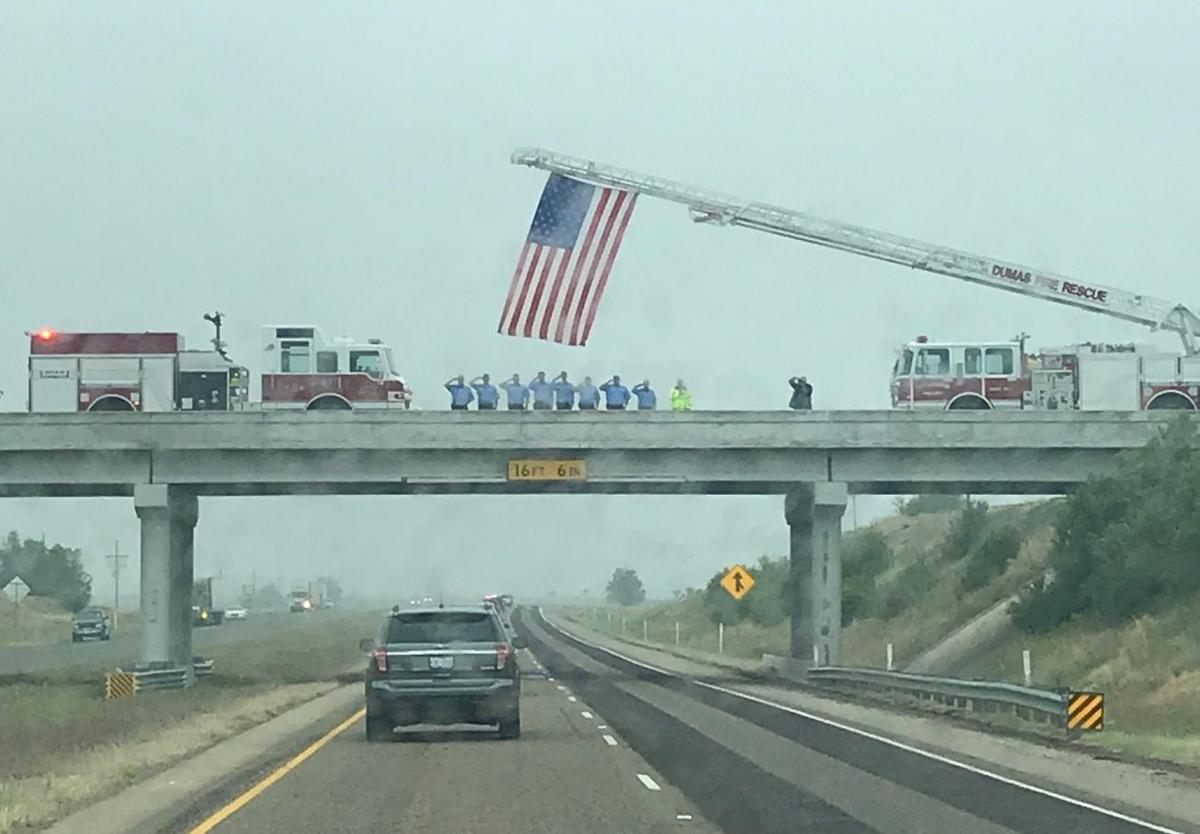 Law enforcement officers from Dumas and Moore County carry Chief Marvin Trejo to an awaiting hearse Friday to begin the journey from Dumas to Amarillo and the chief's final resting place.

Escorted by an honor guard from the Amarillo Police Department, Chief Marvin Trejo and his family are taken for one last trip to the Dumas Police Department station before setting out on the trip to Amarillo for services and burial.

Officers of the DPD pay their final respects to Chief Marvin Trejo.

Law enforcement officers, fire fighters, emergency medical technicians, and other first responders from around the Panhandle came together Friday with their colleagues from Dumas, Sunray, Cactus, and Moore County to honor Dumas Police Chief Marvin Trejo and escort him from Dumas to Amarillo and his final resting place.

Trejo died last Sunday in an area hospital; officers of the Dumas Police Department (DPD) escorted him back to Dumas.  On Friday, an honor guard made up of motor officers from the Amarillo Police Department led the procession of family members, first responders, and citizens that accompanied Trejo to Memory Gardens Cemetery in Amarillo for a graveside service and burial.  Father Gabriel Garcia of Saints Peter and Paul Catholic Church in Dumas officiated.

Dumas firefighters with an American flag waving from the extended ladder of a fire truck gave Trejo a special salute from the Four Way bridge as the procession passed underneath on its way to Amarillo.

Trejo's death provoked an outpouring of sadness and tributes from across the community.

DPD spokesman Sergeant Clayton Williams wrote, "Chief Trejo has left a permanent mark on the lives and careers of many officers, not only of the Dumas Police Department but also those of many other communities.  Chief Trejo's leadership and guidance will be greatly missed by our officers."

Dumas Mayor Bob Brinkmann added, "It is a huge loss.  He was a great guy and a good friend.  He was just a wonderful public servant for a lot of years in Dumas.  He gave his heart and soul to this community."

The Moore County Commissioners in their regular commissioners' court on Monday observed a moment of silence in honor of the long-time Dumas lawman.  "God bless his family," said Moore County Judge Rowdy Rhoades.

The Cactus Police Department posted on Facebook, "It was an honor to work  with him."

Here's a luxury hotel during coronavirus

ESPN2 to Broadcast the Return of College Baseball

A spokesperson for the Moore County Sheriff's Office wrote, "Chief Marvin Trejo was a great man who loved the community he served."

Grace Dovalina, former executive director of Safe Place, Inc., a domestic violence shelter in Dumas, had experience working with Trejo over the years.  "Heartbroken.  He truly was one of a kind and did the uniform proud," she wrote.

April Leming, former executive director of The Bridge, an Amarillo based organization that assists law enforcement in conducting forensic interviews of abused children, said, "I worked with Chief Trejo for many years when I was at The Bridge.  He was a wonderful man, and will be sorely missed."

Trejo began his tenure at the DPD in 1994.  Over the years he worked as a patrol officer and investigator.  He rose steadily through the ranks.  By 2019, Trejo was a captain and the assistant chief of the DPD.  When then Chief Jim Nelson announced his plans to retire, city officials chose Trejo to be his successor.  Trejo became Dumas' first Hispanic police chief.  Mayor Brinkmann said one of Trejo's most important qualities as chief was his ability to get diverse people and groups to get along and work together.

As he left, Nelson expressed confidence in his successor.  "I am leaving it (the department) in good hands," he said.  On hearing of Trejo's death Sunday, Nelson wrote, "My heart is absolutely broken right now."

Williams said, for now, Lieutenants Joe Morales and Tom Flood will perform the duties of the chief until city officials choose and interim chief.  On Saturday, Dumas City Commissioner Pat Sims said interviews for an interim chief will begin next week.  He said city officials are in no hurry to find a permanent chief.  "It will be very hard to find a replacement for Chief Trejo."

In the meantime, "Everyone has stepped up and stepped in where they need to," said Brinkmann.  "We have really good officers."