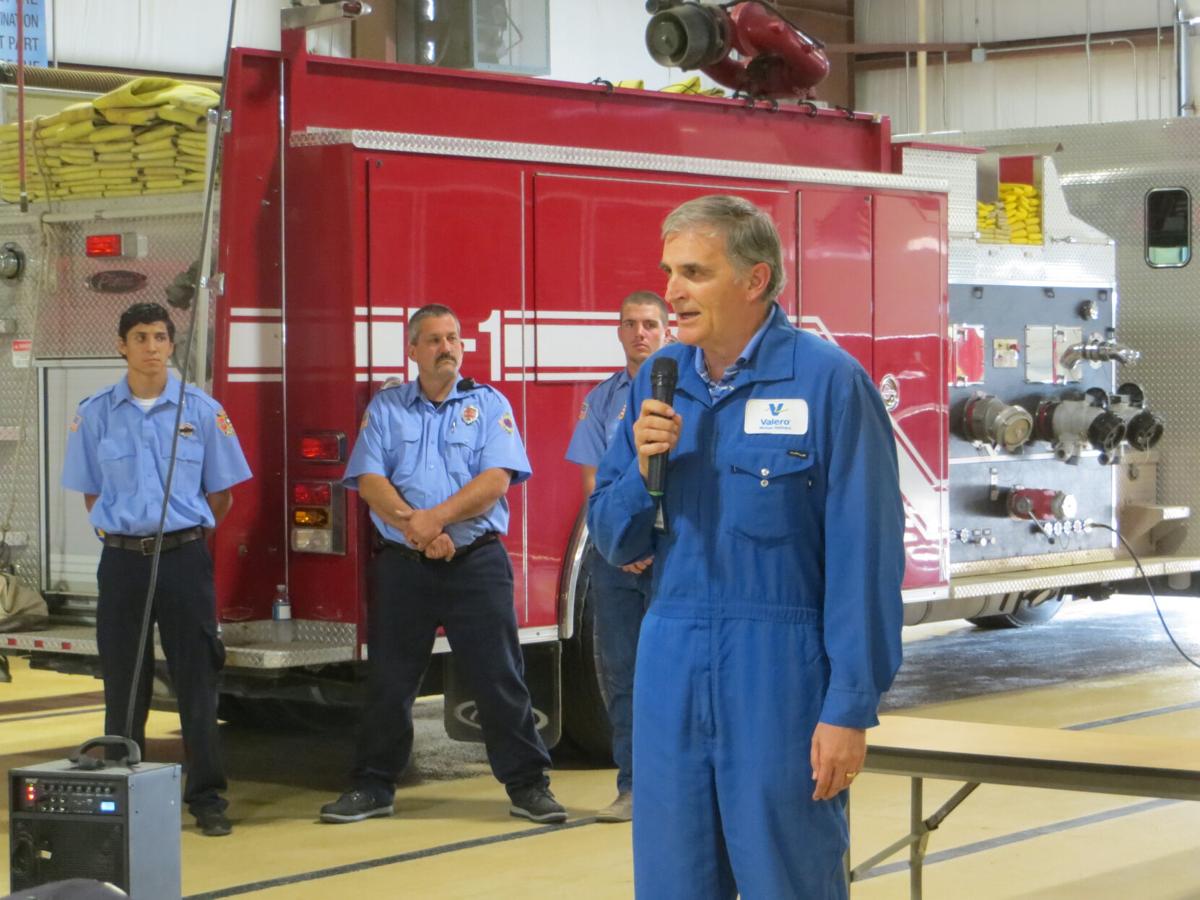 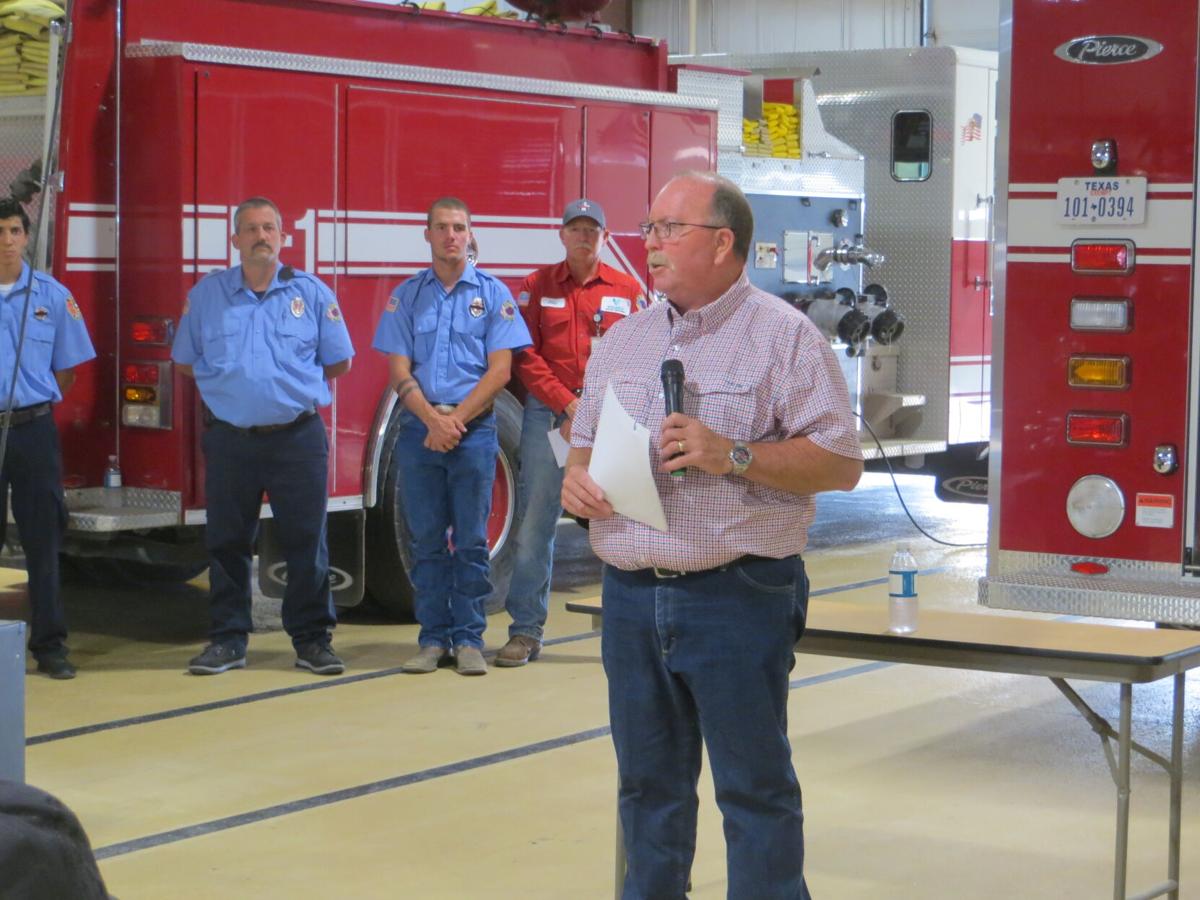 Larry Copelin, former chief of the Valero Fire Department at McKee Refinery: "I believe we are still indebted to these men." 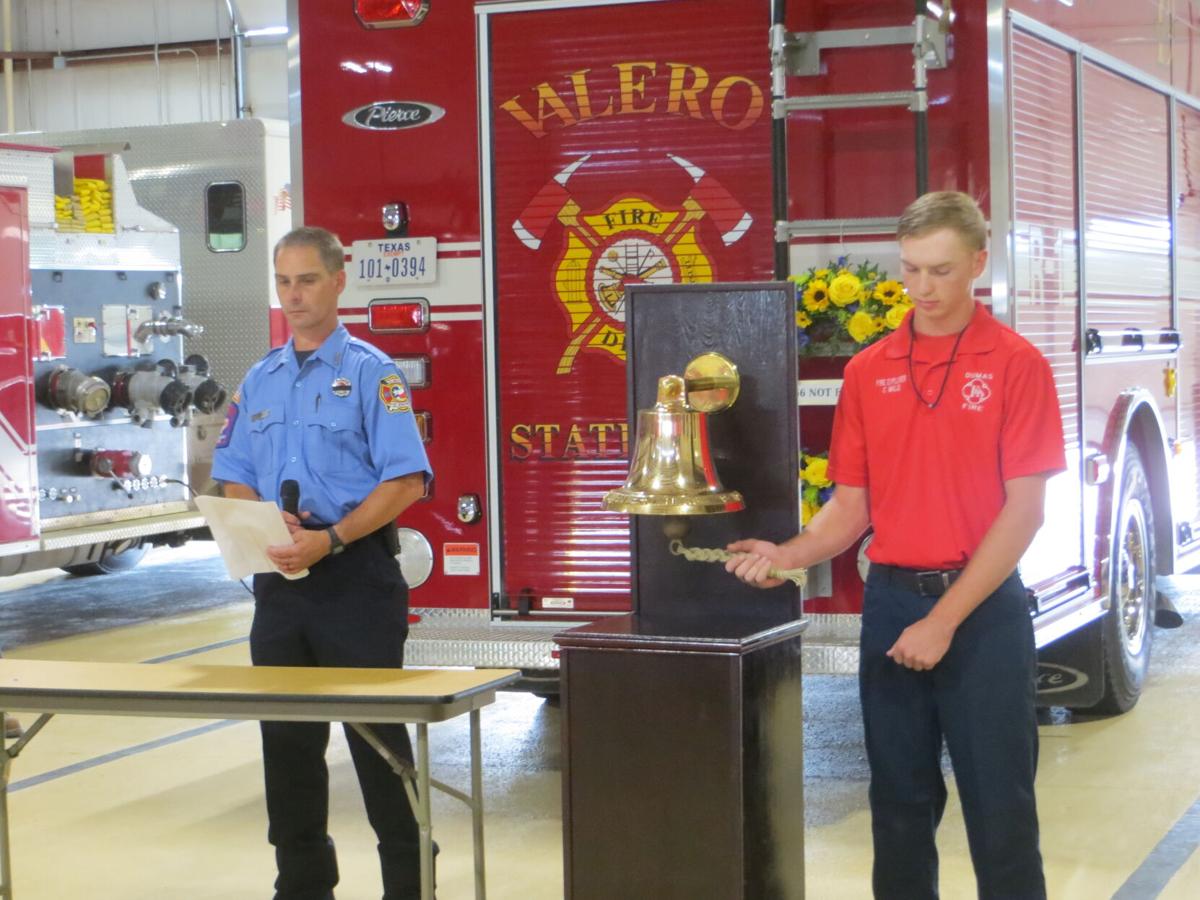 Dumas firefighters K.C. and Caed Mild, father and son and relative of one of the 19 deceased firefighters from 1956, perform the firefighters' bell ringing ceremony Thursday to honor the fallen from the Shamrock fire.  The tragic fire took place just a few hundred feet from where Thursday's memorial ceremony was held. 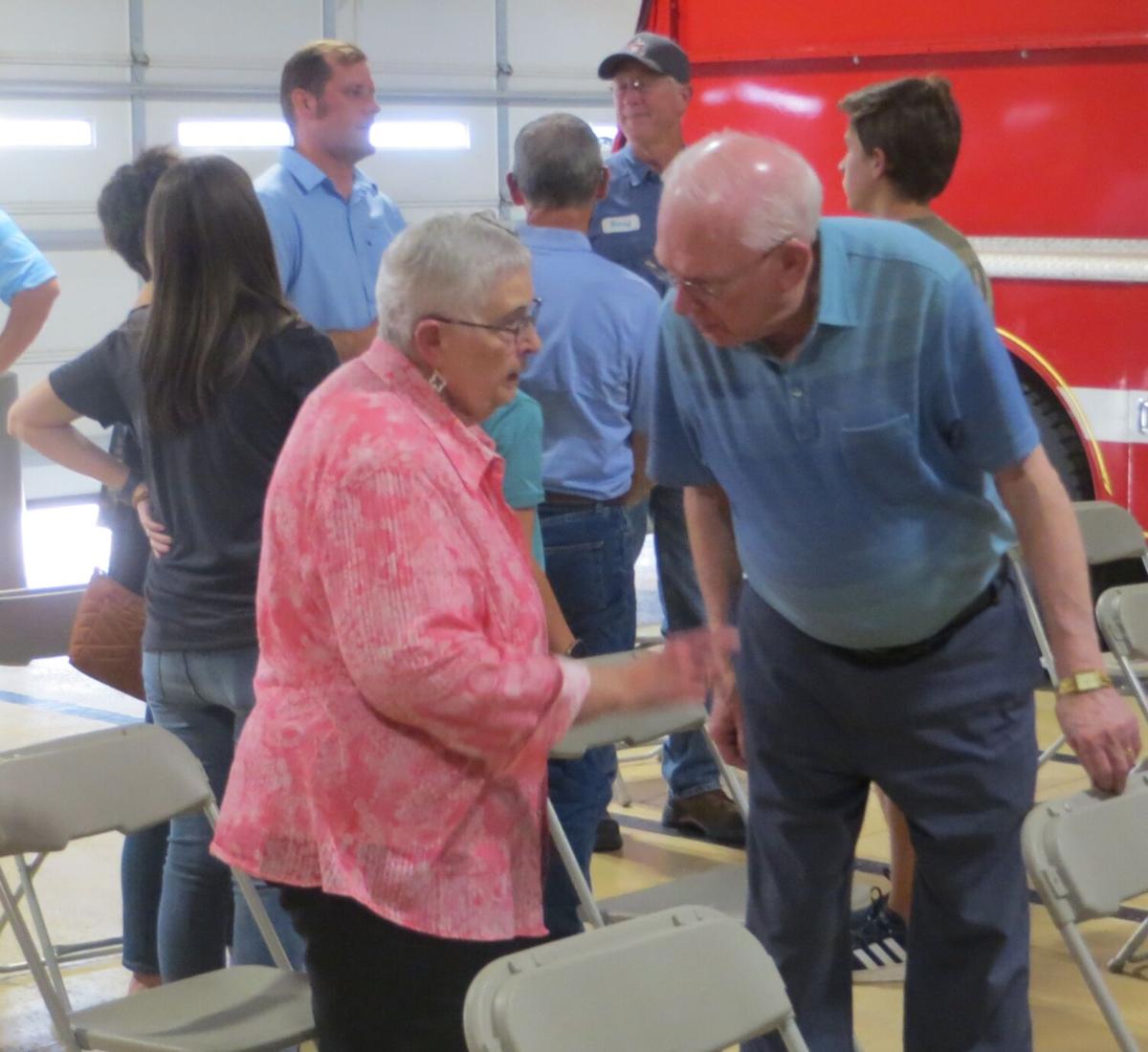 Family members of the fallen lingered after the ceremony Thursday to visit and remember.  Multiple generations of descendants of the men who died in 1956 live in Moore County.

Larry Copelin, former chief of the Valero Fire Department at McKee Refinery: "I believe we are still indebted to these men."

Dumas firefighters K.C. and Caed Mild, father and son and relative of one of the 19 deceased firefighters from 1956, perform the firefighters' bell ringing ceremony Thursday to honor the fallen from the Shamrock fire.  The tragic fire took place just a few hundred feet from where Thursday's memorial ceremony was held.

Family members of the fallen lingered after the ceremony Thursday to visit and remember.  Multiple generations of descendants of the men who died in 1956 live in Moore County.

"We live in a different world now, but responders are still responding," said Larry Copelin, who until his retirement this year was chief of the Valero Fire Department at McKee Refinery.  He was speaking Thursday in Fire Station 19 at the refinery to fellow first responders, company officials, Moore County residents, and family members of the 19 firefighters killed July 29, 1956 fighting a fire at the then Shamrock McKee Refinery that would turn out to be the fourth most deadly industrial or single structure fire in terms of firefighter deaths in American history.

There are not 18 other fire stations at McKee Refinery.  As Copelin explained, his predecessor in 2006, Mike Roberts, had the job of naming the then new fire station.    He came up with the idea of naming it Fire Station 19 as a tribute to the fallen 19.  To complete the tribute, Roberts had a memorial created at the entrance of the building with plaques dedicated to each man and pictures and information about the day and aftermath.  Copelin said there was a lot of pride in the building and that the events of that day still had an impact, not just on the several generations of family members who remain, but on the whole community.  "I believe we are still indebted to these men.  We should never forget their response and their families' sacrifice," he said.  "Those people are with us."

Copelin said the lessons learned from the tragedy had been used to make the petroleum industry and fire fighting safer.  "We are still reaping the rewards of their sacrifice," he said.  In an interview after the ceremony, he said that when firefighters responded to a major fire at the refinery in 2007, they were able to control the blaze with no loss of life in large part because of knowledge gained from the events of 1956.

Lauren Bird, plant manager of McKee Refinery, told the group Thursday that he was "struck by the magnitude of what had happened."  The men who died that day were volunteer firefighters from the Dumas and Sunray fire departments and Shamrock employees who volunteered to fight fires in addition to their regular duties.  Bird said that one of the most poignant things he had read about the fire was a news article that came out on the Monday after the Sunday morning fire.  It said that 19 had died, and it gave the names of 18.  One, the article said, had still not been identified.  It took several days for authorities to make a positive identification.  "How terrible to die and not be identified," said Bird.  The man turned out to be Billy Joe Dunn, 25.  Like the others who died, he was a husband and father.  Bird said he was so moved that he sought out Dunn's grave to pay his respects.

Bird echoed Copelin's statement that the lessons learned from the 1956 fire had improved safety in the industry and in fire fighting, and he said the company continues to be committed to operating as safely as possible.  He said he was proud of Fire Station 19 and the Valero Fire Department and grateful to the current generation of first responders who continue to be ready to respond to protect the community as the 19 and their colleagues had been 65 years before.  Finally, he said he was grateful to the family members who continue to remember.

Biden administration moving Bureau of Land Management’s headquarters back to D.C. from Colorado

In addition to the 19 dead, 31people were inured on July 29, 1956, many grievously.  They were taken care of by medical personnel at Memorial Hospital in Dumas.

An emotional high point of the ceremony Thursday came when K. C. Mild, a firefighter with the Dumas Fire Department (DFD) read off the names of the 19 dead while his son, Caed Mild, a member of the youth Explorer program with the DFD, rang a bell for each victim as part of the bell-ringing ceremony performed by firefighters everywhere as a tribute to fallen colleagues.  They are the grandson and great grandson of Durwood C. Lilley, one of the 19.

Bobby Broxson appreciates the annual ceremonies that honor his father, Lewis A. Broxson, and the others.  He said they mean a lot to him.  "They have been having this every year for many years, and I think it is great."  Asked if he had been to each one (They began shortly after the event), he said, "Oh, yes."

Having retired, Copelin does not have to officially take part in the memorial ceremony.  He does it because he wants to:  "I have known the families for many many years … it is good to see them every year."