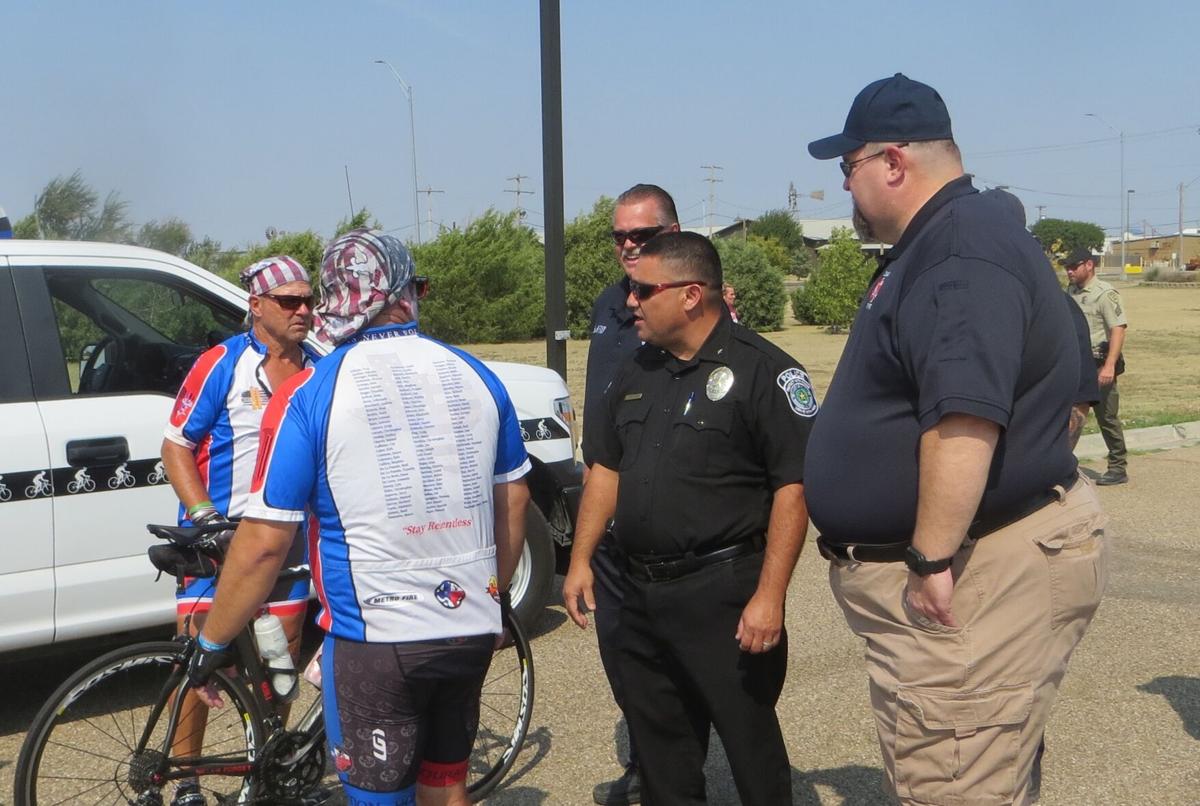 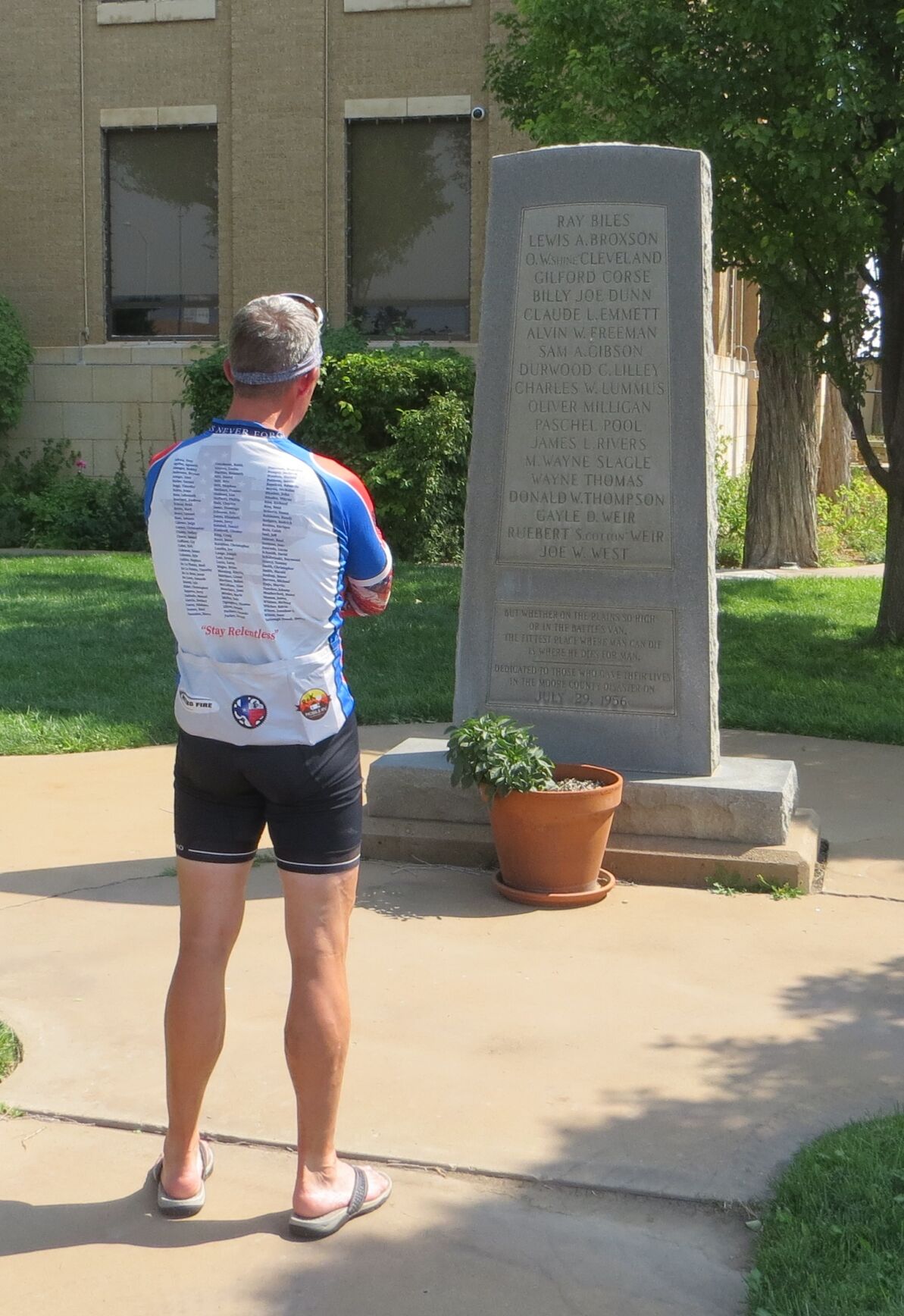 One of the Houston first responders of the Texas Brotherhood Ride looks at the memorial for the Moore County fire fighters lost in the 1956 McKee Refinery fire and explosion.  The riders stopped at the Moore County Courthouse for lunch and a break.

One of the Houston first responders of the Texas Brotherhood Ride looks at the memorial for the Moore County fire fighters lost in the 1956 McKee Refinery fire and explosion.  The riders stopped at the Moore County Courthouse for lunch and a break.

Members of the Dumas Police Department (DPD), Moore County Sheriff's Office, Dumas Fire Department, and other local first responders turned out Sunday, September 12, to escort through Dumas more than 20 of their colleagues from Houston who were on a bicycle ride from Houston to Colorado Springs, Colorado to honor 105 Texas first responders who died in 2020.  (Two Moore County lawmen perished in 2020: DPD Chief Marvin Trejo and Officer Patrick Sloan of the Sunray Police Department.  Both   died from complications of COVID.  They are memorialized on the Officer Down Memorial Page website.)  The riders made a stop at the Moore County Courthouse for lunch and a break before continuing on to Stratford where they were going to stay for the evening.  "We can't express the gratitude we have for these riders," said DPD Chief Ray Resendez.  "It was our honor to escort them through town and get to meet each one of them."

The riders were all either active-duty or recently-retired first responders from an organization called the Texas Brotherhood Ride.  They left Houston on Sunday, Sept. 5 and have been averaging between 90 and 110 miles per day, with no days off, according to  Patrick Davis, a board member of the organization who also serves as a Houston firefighter.

The names of the 105 are printed on the back of the jerseys they were wearing.  The ride is grueling.  "You have to prepare for this, but I'm telling you, no matter how much you prepare, it is long, hard days."  The ride from Amarillo had been a challenge.  "It got a little hilly today. … But you look at the guy in front of you, and every one of those names would want to be in our situation.  They would want to be peddling.  No matter how much you hurt, we have a goal, and we are gong to complete that goal."

The riders had originally intended to be in Colorado Springs by Sept. 18 to take part in the annual Fallen Fire Fighter Memorial ceremony put on by the International Association of Fire Fighters.  The ceremony had to be postponed due to COVID, but  that did not deter the riders from making their trip.  This year holds special meaning for the riders: it is the 20th anniversary of the events of 9-11, during which 343 first responders were killed.

"We want the families to know that we will never forget," said Davis about why they are so committed to the rides.  One person in the group wears a jersey with the names printed of all the first responders that who have been honored since the rides began in 2014.  "We carry the names from our previous rides on that one jersey so their names are not forgotten."  The rides are about more than remembering, however.  "A lot of it is a healing process for other riders.  We talk on the route and just hang out.  Everyone is sharing their experiences.  It is a healing process for a lot of the first responders out here too."

The original Brotherhood Rides began in Florida with a nine-day trip to honor nine fire fighters killed in Charleston.  In 2014, the Florida riders came to Houston and were joined by locals for a trip that took them through West, Texas where they paid tribute to the 12 first responders who were among the 15 people killed in a notorious fire and explosion at a fertilizer plant in 2013.

Resendez said the riders gave him, Moore County Sheriff Morgan Hightower, Dumas Fire Department Chief Ron Pray and the other local first responders who came out Sunday a plaque with the names of those who were being honored, and he said he was grateful that the sheriff had included the DPD in the event.  "We don't forget.  Our country is blessed to have the Texas Brotherhood Riders who take the time and put their words into action.  It was very humbling to meet each one of the riders, and it motivates us to continue to serve.  God bless."