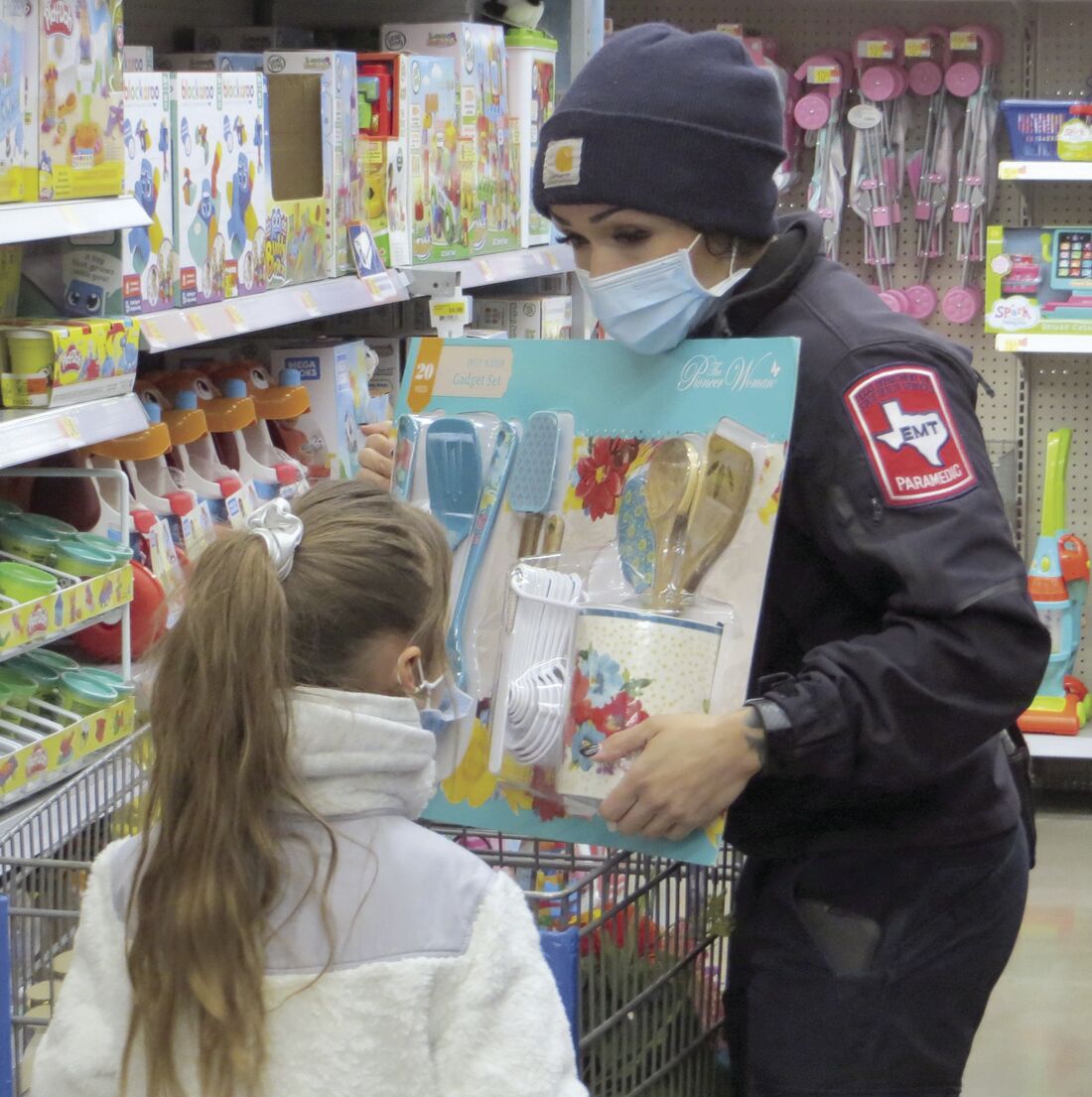 A local emergency medical technician helps a young girl pick out toys at the Shop With a Cop event Saturday. 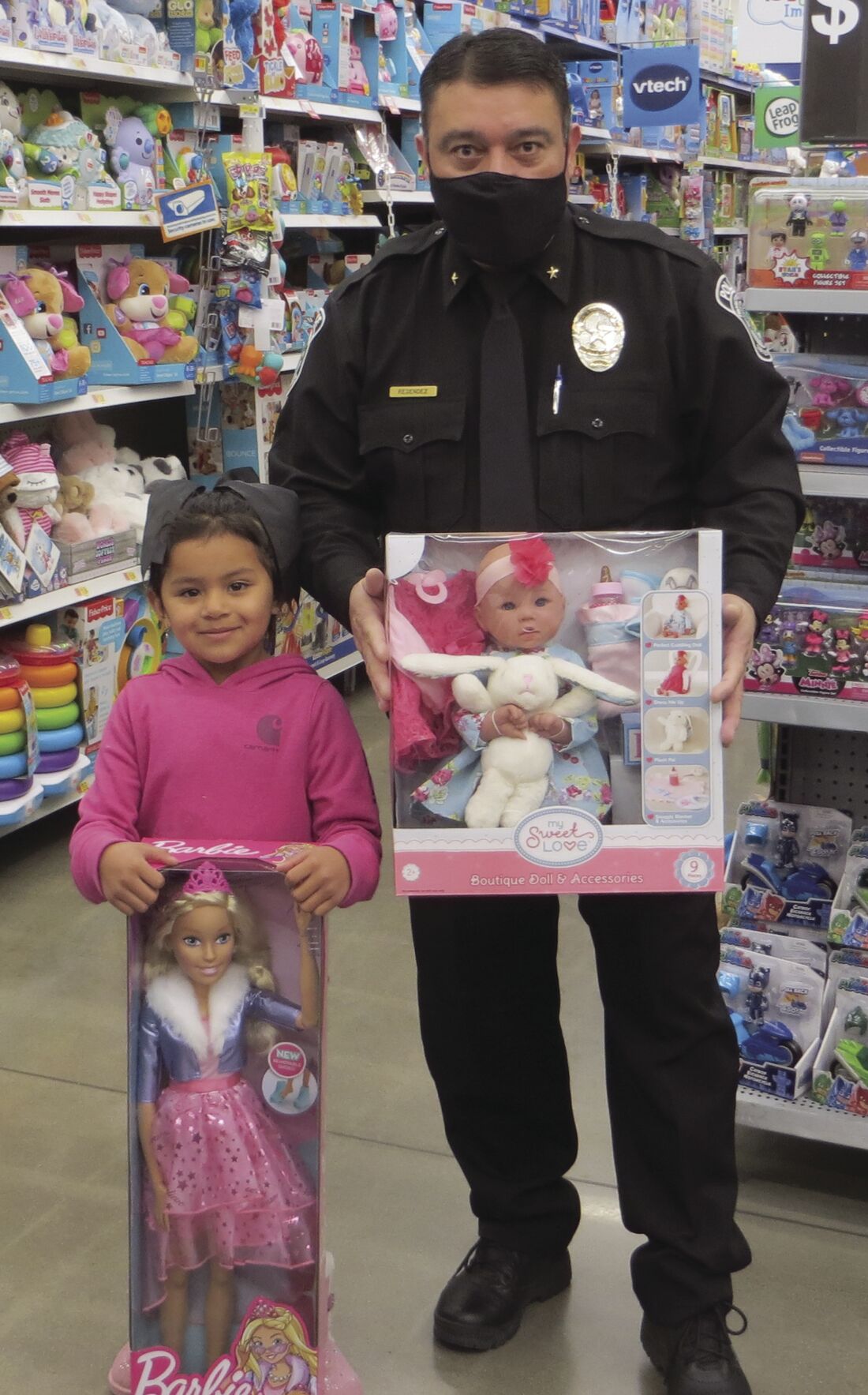 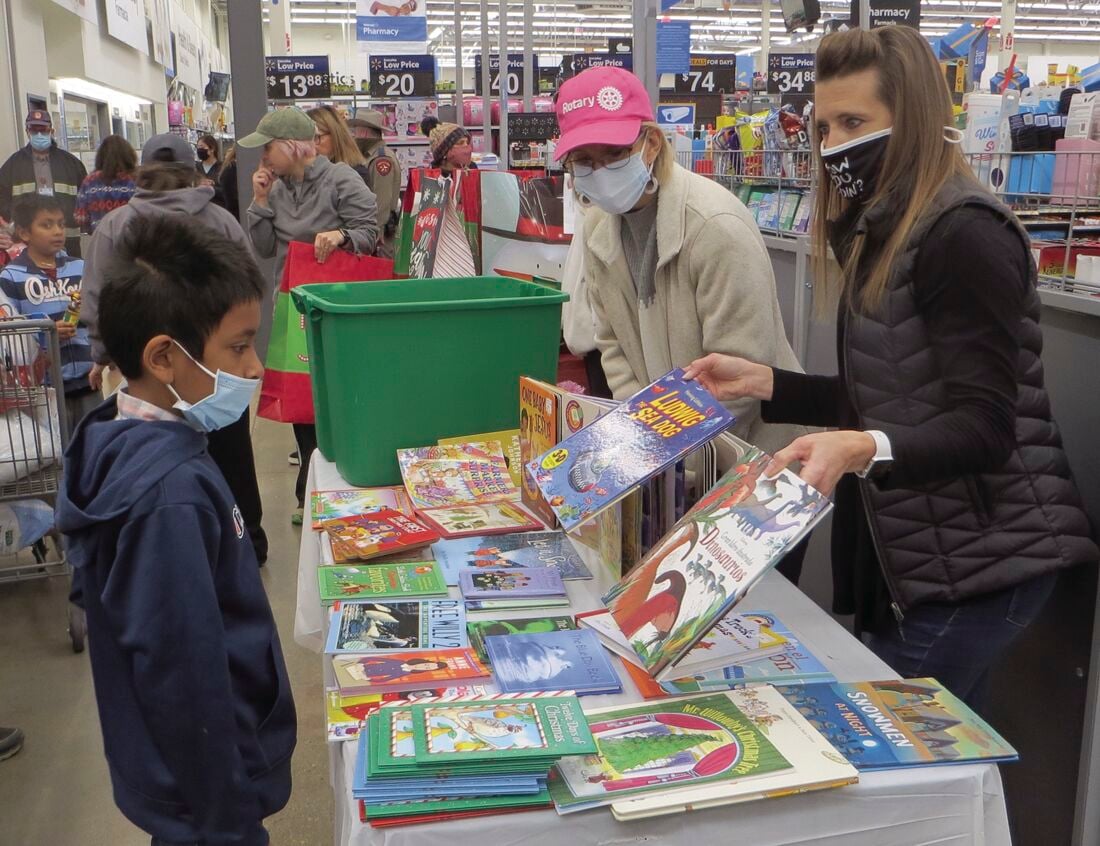 Laura Brunson, left, and Misty Stroebel of the Dumas Rotary Club help a young child select a Christmas book Saturday.  The Rotarians gave every child participating in the Shop With a Cop event a book.

A local emergency medical technician helps a young girl pick out toys at the Shop With a Cop event Saturday.

Laura Brunson, left, and Misty Stroebel of the Dumas Rotary Club help a young child select a Christmas book Saturday.  The Rotarians gave every child participating in the Shop With a Cop event a book.

First responders, businesses, organizations, and individuals from across Moore County came together Saturday at Walmart in Dumas to provide about 80 children from struggling families in the county with some of the ingredients of a merry Christmas.  "I think this is our most successful ever," said Sergeant Jace Delgado of the Moore County Sheriff's Office (SO), one of the organizers of the fourth annual Shop With a Cop event.  This year, Moore County businesses and individuals increased their donations enough for each child to be able to spend $100 on toys and other items he or she would like to have for Christmas.  Last year the limit was $50.  "We are very grateful to the donors," said Delgado.  "We are proud that we are growing and have been able to help more kids this year."

According to Delgado, the nurses from the Dumas and Sunray Independent School Districts compile lists of school children whose families face a bleak Christmas.  The children are paired off with police officers, sheriff's deputies, fire fighters, emergency medical technicians, and other first responders for a shopping spree at Walmart.  In the past, because of their home circumstances, some of the children would spend their money on pillows, blankets, and other necessities, so Delgado said the organizers expanded the event beginning last year to include food and other items to give the whole family a Christmas dinner and the child warm clothes and other things necessary to stay comfortable over the cold winter months.  With that, the children felt more free to indulge in the toys that were their special Christmas wishes.  Delgado said there were more than 60 children on the lists they received from the schools this year, but with siblings included, the number of children helped by the event rose to 80.

With COVID surging this fall and quarters close at Walmart, Delgado said the organizers considered canceling, but "we all came to the conclusion that that was not possible this year.  Now more than ever these kids need a Christmas," he said.  "Parents have been out of work. … Some of these kids had to stay home six months. … we felt that now more than ever we had to do something for these underprivileged kids to make sure they had a Christmas. … People are hurting … so we felt that there was no way we could cancel this year."  Delgado added that everyone was asked to wear a mask for the event, and Walmart placed hand sanitizing stations around the store.  For the most part, Saturday, people did wear masks.

Once the children finished shopping with their first responder, they each received a 10 pound roll of beef from JBS, pillows and blankets from 69th Judicial District Attorney elect Erin Lands, a turkey and box of food from Care Net, toiletries from the Moore County Hospital District (MCHD), a winter hat and gloves from XCEL Energy, Christmas books from the Dumas Rotary Club, a coat from Esprit, and a bicycle helmet from the MCHD Emergency Medical Services (EMS).  Some children won bicycles, donated by Walmart and the MCHD, in a raffle.  In one case, a girl with a twin sister won a bicycle, and a donor, not wanting the sister to feel left out, bought her a bicycle too.

Walmart employees served up donuts, juice, and coffee to those participating in the event.  High school students from the National Honor Society kept the children entertained while they waited for things to start, and Irene Delgado of the Dumas Downtown Association helped out with the organizing.  Santa Claus was on hand for pictures and additional Christmas wishes.

While the children seemed thrilled, the benefits of Shop With a Cop were not all one sided Saturday.  The adults taking part received their own reward.  "It is fun to interact with the kids," said Firefighter Kelly Davis of the Dumas Fire Department (DFD).

Heather Jolly of Crime Stoppers added, "I love Christmas, and it is just one of my favorite things to do to give back to these kids at Christmas."

New bridge to Canada will be a ‘game changer’

Father of NC suspect in Capitol riot: Charges ‘blown out of proportion’

Lieutenant Brandon Jones of the SO said, "It feels great.  It feels like Christmas.  I am blessed to be a part of this."

Sergeant Billy Long of the Cactus Police Department (CPD) was taking part for the first time, "A lot of times they look at us as something other than human.  We talked about school and home life.  It shows him that I am human just like him."

New Dumas police chief Ray Resendez had taken part in Shop With a Cop events in his previous department in Canyon, but he said he was impressed with how much the Dumas event had grown over the years, and he also enjoyed the experience Saturday, "I had a great time with the kids, and it looked like the first responders did too."

Steve and Kathie Fuston were passing out bicycle helmets for the MCHD.  Both have participated in Shop With a Cop before.  "I am just overjoyed to see the smile on so many faces," said Steve.

Kathie added, "I just love this.  It is so much fun to see all the kids excited and happy with their gifts."

Sergeant Alisha Sladek of the Dumas Police Department (DPD) was on her third Shop With a Cop Saturday.  "It is always fun to give back to the community."  This year, she was accompanied by her partner, Ronan, the Dumas Police Department's K-9 police dog.  According to Sladek, Ronan was a little nervous at first, and the children shopping with Sladek and Ronan were a bit wary at first too.  By the end, however, the children and Ronan warmed to each other, and according to Sladek, Ronan became so comfortable that he let the children pet him.

The first responder organizations participating Saturday were the SO, the DPD, the Texas Department of Public Safety, the DFD, the Dumas Independent School District Police Department, the CPD, the MCHD Emergency Medical Services, Moore County Emergency Management, and the Texas Parks and Wildlife Department.