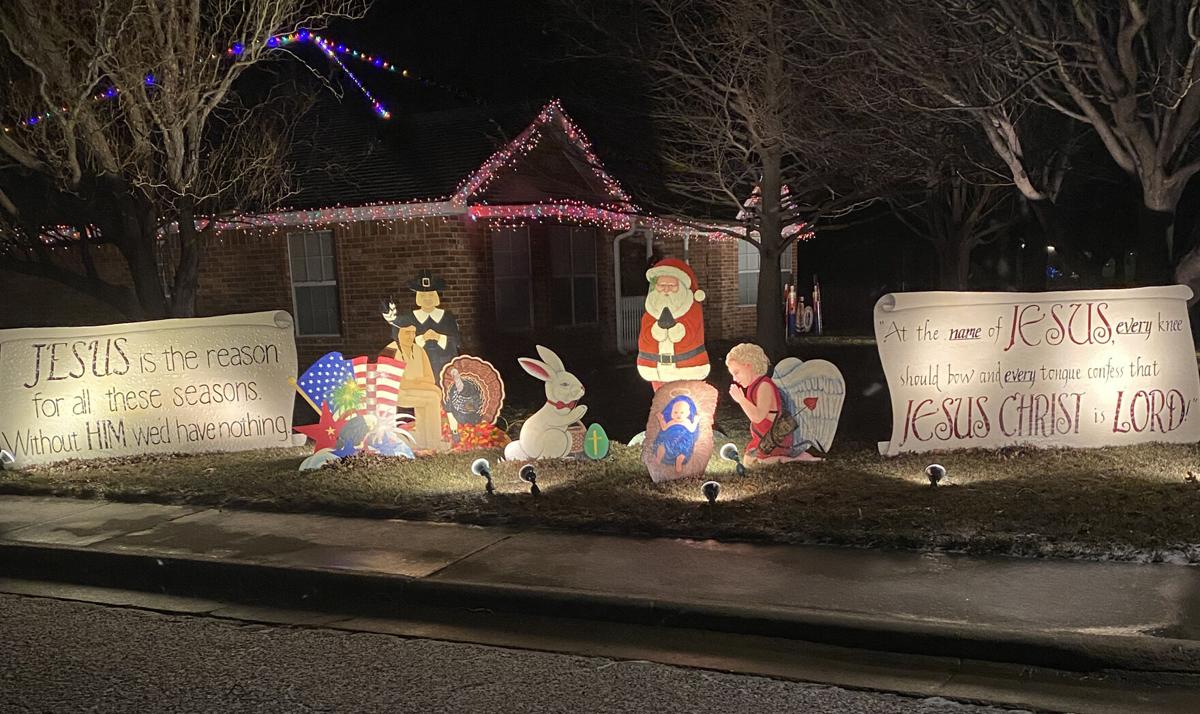 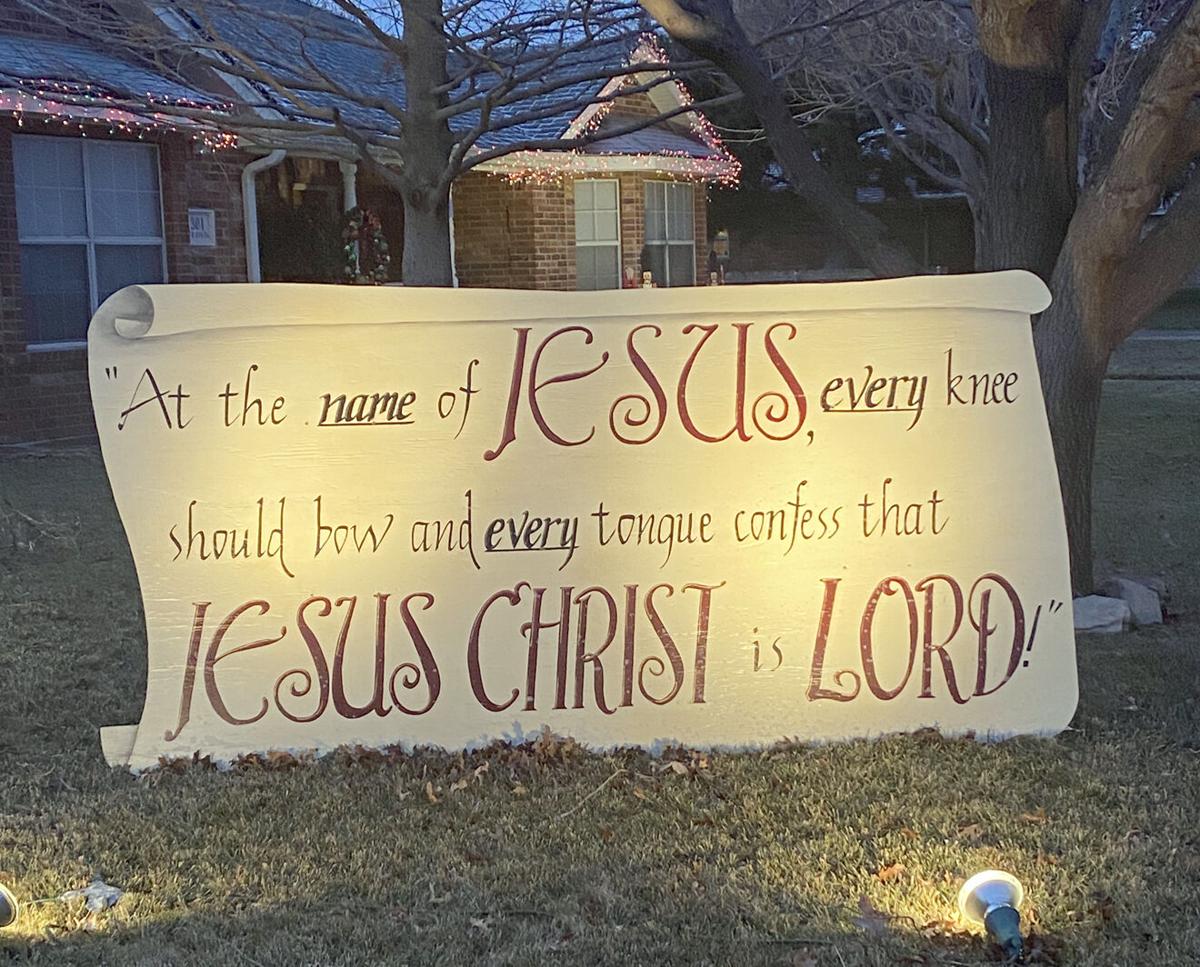 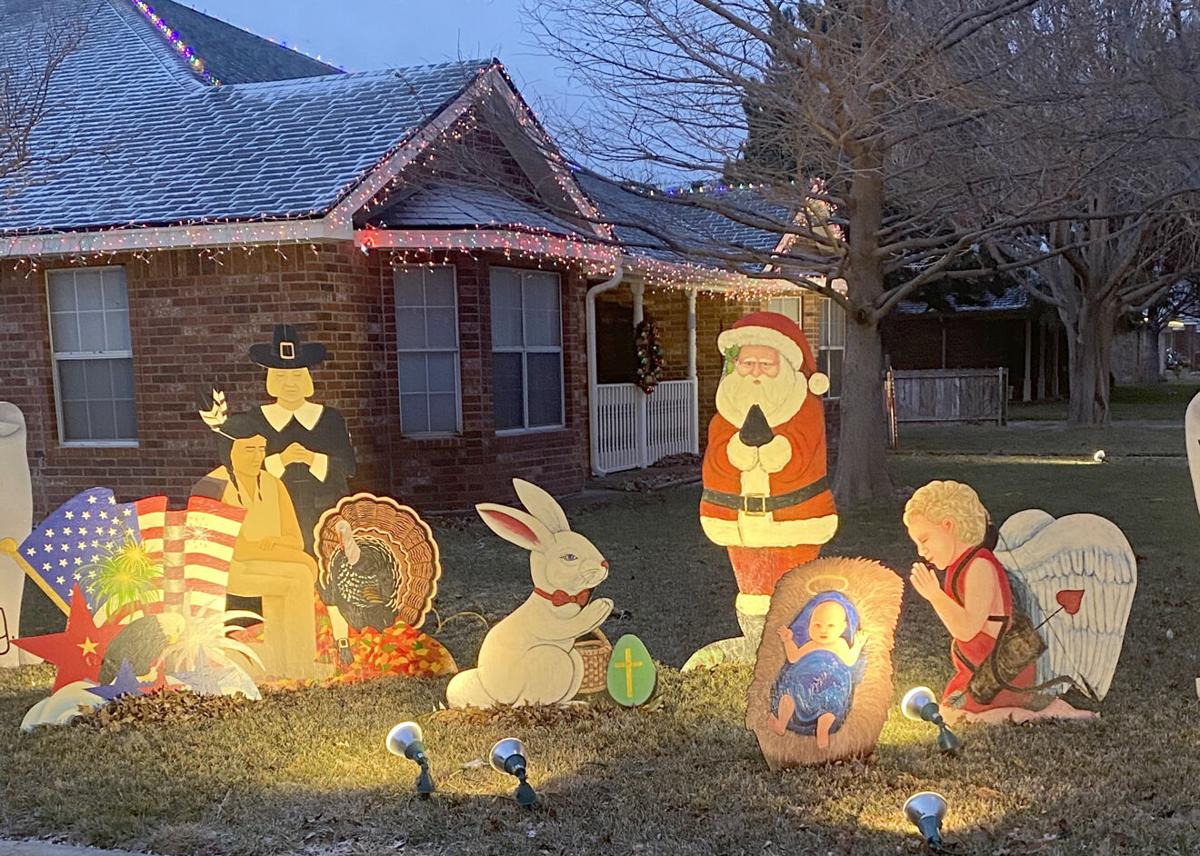 Christmas is upon us and will be here before we know it. And along with Christmas comes yard decorations depicting the season. However, there is one couple who does more than just yard decorations.

David and Penny Green have their yard decorated with emphasis on the real reason for the season. Penny says that they had not really thought about the yard art, but for three nights in a row she dreamed about vivid and colorful yard art depicting the real reason for the seasons that we, as Americans, celebrate several holidays, such as Valentines, Easter, the Fourth of July, as well as Thanksgiving and Christmas.

She called a friend about doing the art work for the yard. This friend was not available for the task. Penny then called the art department at high school. She talked to Selenda Hightower and Donna Fowler, art teachers at the time. Selenda told her that if she could draw the pictures on wood, that her grandfather in Sunray could cut the pieces for her.

The grandfather cut the pieces with his buzz saw. The art teachers then colored the pieces. Penny says that as soon as she got the process started, she quit having the dreams. She believes this was confirmation that they were to do the yard art work.

Penny says that without Jesus we would not have the holidays. Valentine's Days tells about the love of God for His people. Of course Easter tells about the death and resurrection of Jesus. Then the Eagle depicts the Fourth of July celebration of our Freedom. Jesus gives His people freedom from sin and freedom to serve Him. The Eagle is the U.S. National Bird. And, of course Thanksgiving lets us know that we are thankful for all that God has done for us. Now, do you know what Christmas represents? Of course we do. It represents the day of Christ's birth. Without Jesus there would be no reason to celebrate.

As a person looks at the yard of the Greens, they will notice that all of the art work is bowing toward Jesus.

Penny references to Phil. 2:10 which says that every knee will bow to Christ. And, this will happen just as all of the other Scriptures will be fulfilled.

There have been many people stop by the Green's home and look at the yard art work. Penny says there have been mothers with their children stop, look and talk about the meaning of the art work as it relates to Jesus. This is just one more way of getting the Gospel of Jesus to the world.

One year Penny and David were not going to be home for Christmas and therefore they did not put up the art work. They had neighbors tell them about it and some even wanted to buy the signs so it wouldn't happen again.

Members of the First Baptist Church, David and Penny have five children and four grandchildren. They are raising a granddaughter, Hannah, who is a junior at high school and is a cheerleader and also in the band.

God has not called everyone for the same task, but He has called each one of to do something for His Kingdom. And David and Penny are doing their part to tell others about Jesus and His love.