Free access for current print subscribers
Get Started
You are the owner of this article.
Edit Article Add New Article
You have permission to edit this article.
Edit
Home
News
Sports
Business
A & E
Opinion
Obituaries
Multimedia
Announcements
e-Edition
Classifieds
1 of 2 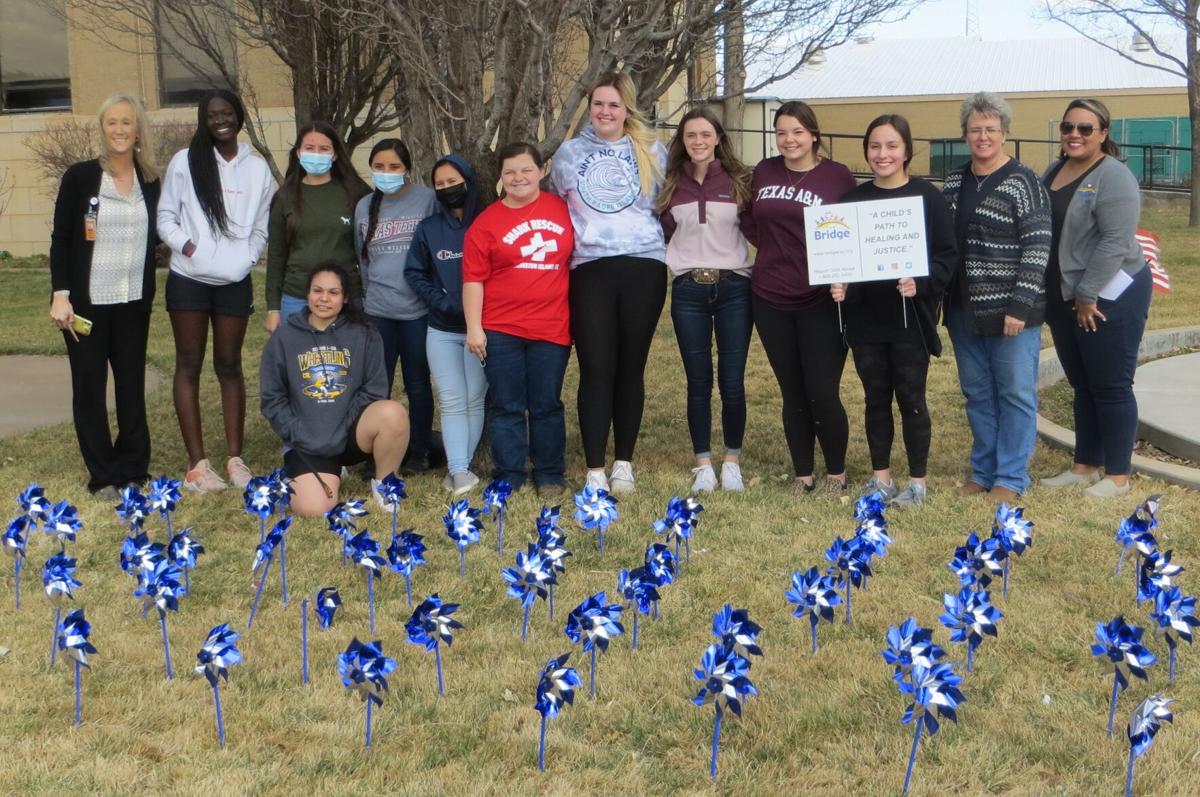 Members of the Dumas High School Leo Club, National Honor Society, and Student Council join Jackie Mikeska of the Bridge and local Bridge Advisory Board members Jill Williams and Brenda Koehn Tuesday to plant pinwheels in front of the Moore County Courthouse in observance of April as National Child Abuse Prevention Month.  Each of the 64 pinwheels represents a local child helped by the Bridge.  The pinwheels will remain throughout the month of April. 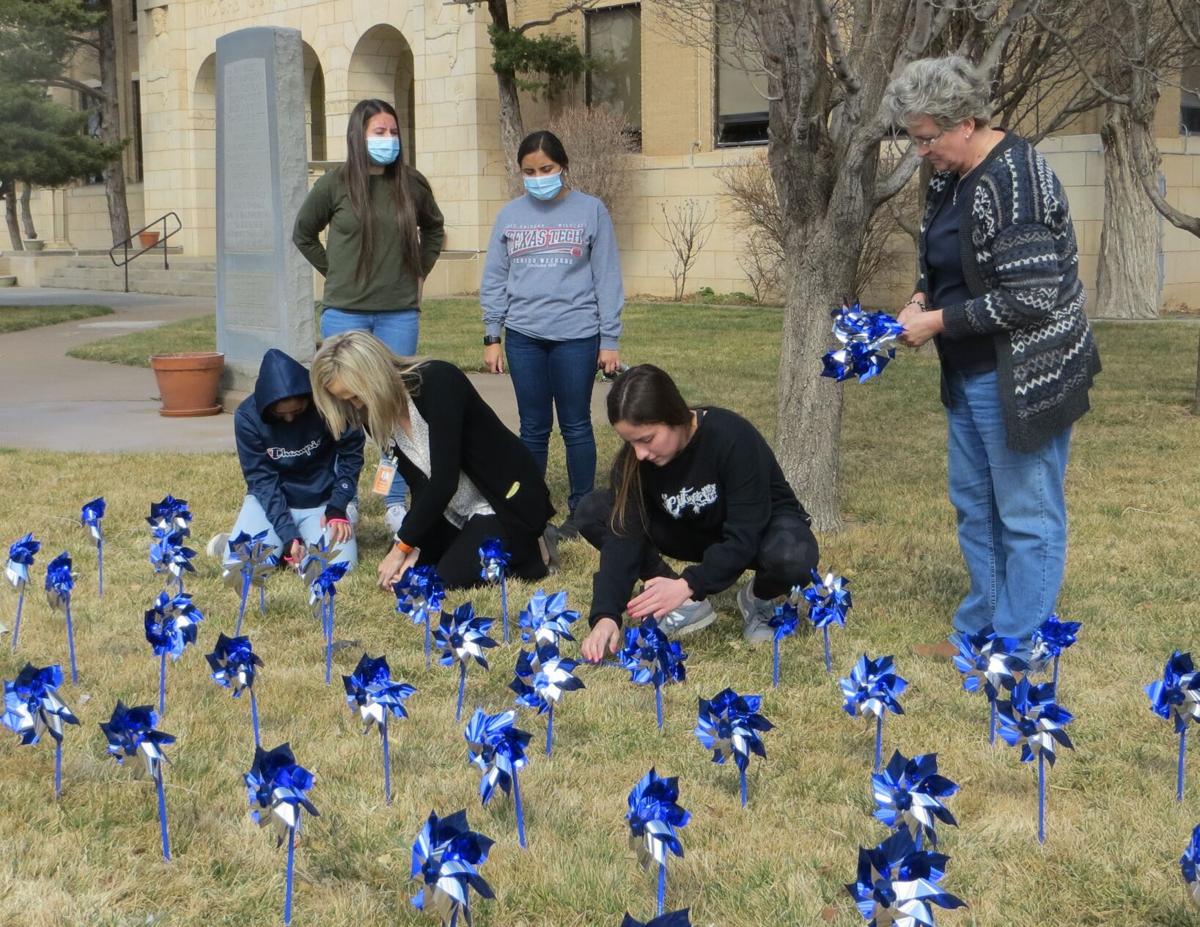 Members of the Dumas High School Leo Club, National Honor Society, and Student Council join Jackie Mikeska of the Bridge and local Bridge Advisory Board members Jill Williams and Brenda Koehn Tuesday to plant pinwheels in front of the Moore County Courthouse in observance of April as National Child Abuse Prevention Month.  Each of the 64 pinwheels represents a local child helped by the Bridge.  The pinwheels will remain throughout the month of April.

Dumas High School (DHS) students from the Leo Club, National Honor Society, and Student Council joined Jackie Mikeska from the Bridge Children's Advocacy Center in Amarillo and local Bridge Children's Advocacy Advisory Board members Jill Williams and Brenda Koehn Tuesday in planting 64 little pinwheels in front of the Moore County Courthouse.  According to Mikeska, each pinwheel represents a child from Moore County who was in a possibly abusive situation or witnessed a crime and who found help providing information to law enforcement in a non-traumatic manner from the staff of the Bridge.  The pinwheels will remain at the courthouse for the entire month of April.

April is National Child Abuse Prevention Month.  Each year the staffers of the Bridge mark the occasion by placing the pinwheels in front of the organization's main headquarters in Amarillo and on the courthouse lawns of the counties in which they operate.  This year there will be over one thousand pinwheels spinning in the wind in the Panhandle.

In the past, children who were allegedly the victims of physical or sexual abuse or who had possibly witnessed a crime had to tell their story over and over again to police investigators and others in an atmosphere that was anything but kid-friendly.  The Bridge, which was the first organization of its kind in the Texas Panhandle, was created to minimize the trauma on children and avoid the kind of leading and suggestive questioning that sometimes have made prosecutions of these types of crimes a problem.  The Bridge offers children the opportunity to tell their story one-time in a comfortable, non-threatening environment.  At both the Amarillo Headquarters and satellite offices in Dumas and elsewhere in the Panhandle the child tells his or her story to a highly trained interviewer who knows how to pose developmentally-appropriate questions without leading the child's testimony.  Law enforcement investigators watch the process via camera in another room.  The testimony is recorded, and the child does not have to continue to relive what was possibly the worst experience of his or her life.  Sergeant Cammie Clark of the Dumas Police Department, who has taken part in many Bridge interviews, said, "They get to chit-chatting and it is all about helping the child feel comfortable … the interviewer doesn't ask leading questions; they are just there for the child to talk to.  The interviewers at the Bridge have gone through hours and hours of training on children's behavior and reading their mannerisms.  I have done criminal training; they have done children's training.  They know what to ask and how to ask it. … The service they provide to law enforcement and the victim is just awesome."

Dumas Police Department Chief Ray Resendez in a recent interview identified child abuse as one of the biggest crime problems the city faces.  "There are a lot of cases," he said.  He said child abuse was an area that needed increased attention.

Mikeska said students help with the pinwheels every year, and it is important to get them involved.  "We think it is super impactful when students are in the know of what is going on."

On Tuesday, the students seemed happy to be participating.  Williams, who is also a teacher at DHS, said, "The Bridge comes to Leo Club every year and gives a presentation on their programs and what they do for children. … We just always participate with Child Abuse Prevention Month. … The kids like to find a good cause."