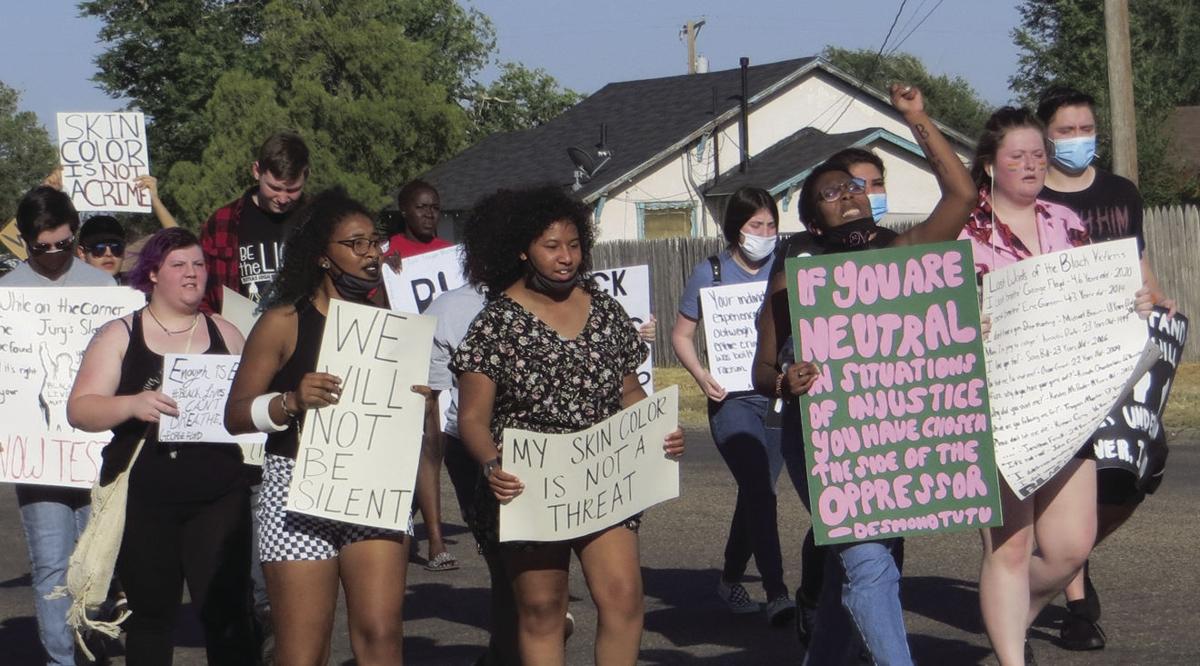 Protesters march in Dumas in support of the Black Lives Matter movement.  The march and subsequent rally at the DPD station were peaceful. 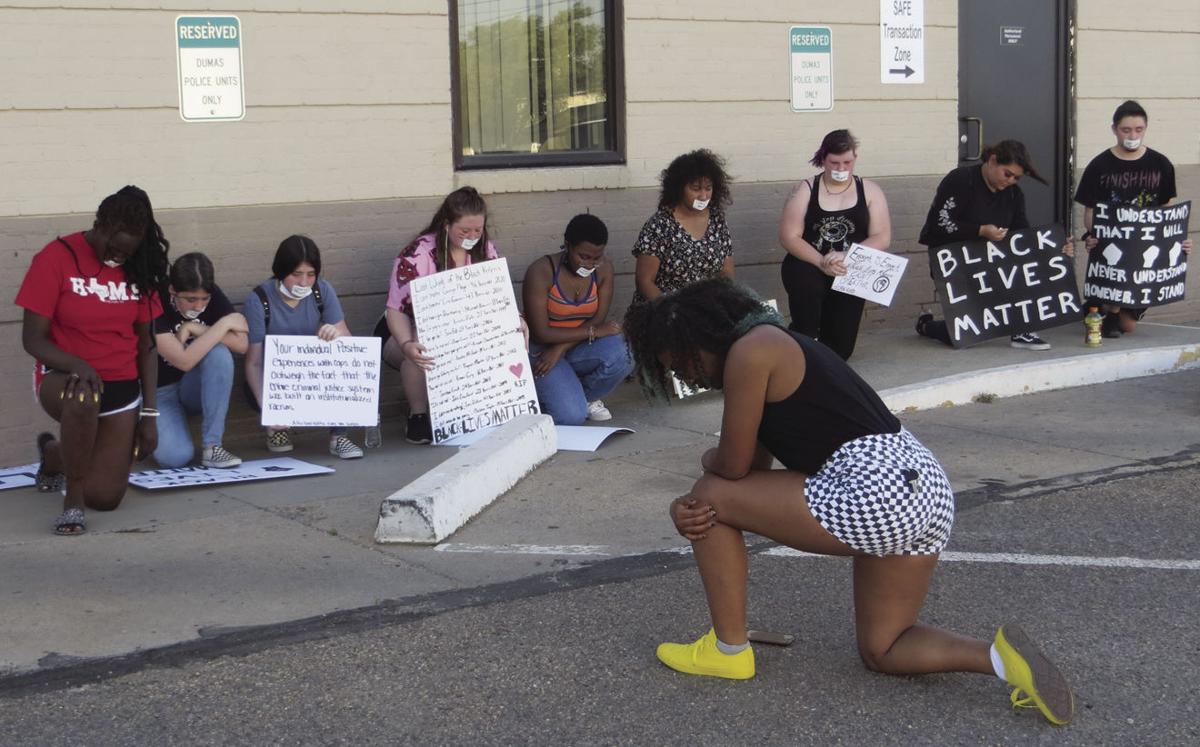 Protesters kneel by the DPD station in support of the Black Lives Matter movement.

Moore county Judge Rowdy Rhoades and Dumas Police Department Interim Chief Chris Bratton pose with protesters in McDade Park before their march downtown to the police station for a rally.  The protesters were escorted by officers of the DPD.

Protesters march in Dumas in support of the Black Lives Matter movement.  The march and subsequent rally at the DPD station were peaceful.

Protesters kneel by the DPD station in support of the Black Lives Matter movement.

Moore county Judge Rowdy Rhoades and Dumas Police Department Interim Chief Chris Bratton pose with protesters in McDade Park before their march downtown to the police station for a rally.  The protesters were escorted by officers of the DPD.

"We want to come together and unify as one, because we are in this fight together as humankind," said Monica Blakemore Monday afternoon in McDade Park.  She was about to lead a small but passionate group of young people on a march from the park up Maddox Avenue to 7th Street and the station of the Dumas Police Department for a rally in support of the ongoing Black Lives Matter-led national protests against the recent deaths in police custody of George Floyd in Minneapolis and a number of other black men and women across the country.  "It's not saying black lives are superior to others, it is saying we are all equal," she said.  "What I would like to see done is that everyone realize that we all deserve to be treated fairly. … We have gone from a country that has seen so much change … we are going backwards, and we need to go forward."

The march and rally Monday were peaceful.  As the marchers walked to the station holding signs and chanting, they were escorted by members of the Dumas Police Department (DPD).  Both the officers and protesters treated each other with respect .  There were none of the aggressive and sometimes violent confrontations that have characterized some of the protests elsewhere.  Moore County Judge Rowdy Rhoades, DPD Interim Chief Chris Bratton, Lieutenant Joe Morales, and other DPD leaders were at McDade Park Monday and posed for a group picture with the demonstrators before they headed off on their march.

In addition to listening to speakers, the protesters at the station kneeled in silence for nine minutes, the time the Minneapolis police officer had his knee on Floyd's neck and back  Their mouths were covered by tape on which was written, "I can't breath,"  Floyd's last words before dying.

The easy relations between police and demonstrators was helped by the fact that the DPD has never had a complaint about racial profiling filed against it.  The police shooting in Dumas two years ago that resulted in the death of a suspect was ruled justified by investigators.  "This is not to say that Dumas has a problem," said Blakemore.  "Dumas has a beautiful community."

Bratton, who describes himself as progressive in the police community, said of the demonstration, "I have no problem with this.  I think it is a great idea for these young kids to come out and be able to express themselves and have a demonstration, because they feel very strongly about it.  Part of our job as police officers is to be part of it and to make sure that their voice is heard as well.   I am really adamant that we make sure everybody's voice is heard, because that is the only way we can have an honest debate."

Bratton said he does not support the defunding of police departments that some have called for, but he says he has supported a number of police reforms over the years, and he is a proponent of community policing.  "We have to be involved with the community.  We have to listen to the community.  We have to hear their concerns, and we have got to address their concerns in terms of how we choose to police."  He says the types of choke holds that have sometimes led to deaths are not practiced in Dumas.  "I don't allow them."  And he has no sympathy for the Minneapolis Police Department officer, since charged with second degree murder, who kept his knee on Floyd's neck and back for nine minutes resulting in his death.  "He needs to go to prison, and most of the administrators that I know and deal with agree with that."