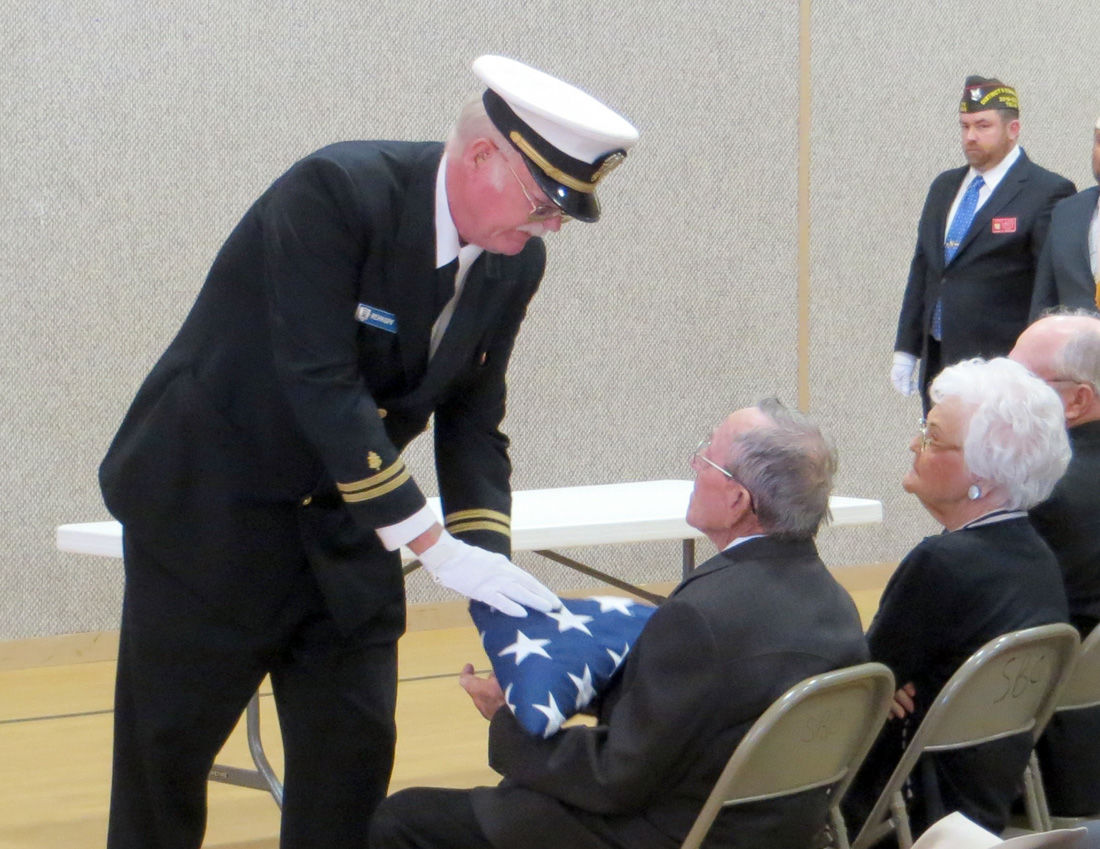 Kent Cartrite receives the flag that nomally would have covered the casket of his brother, SSG Harvey Lee Cartrite.  SSG Cartrite, missing in action since 1944, was memorialized Saturday in a ceremony in the Sunray Baptist Church. 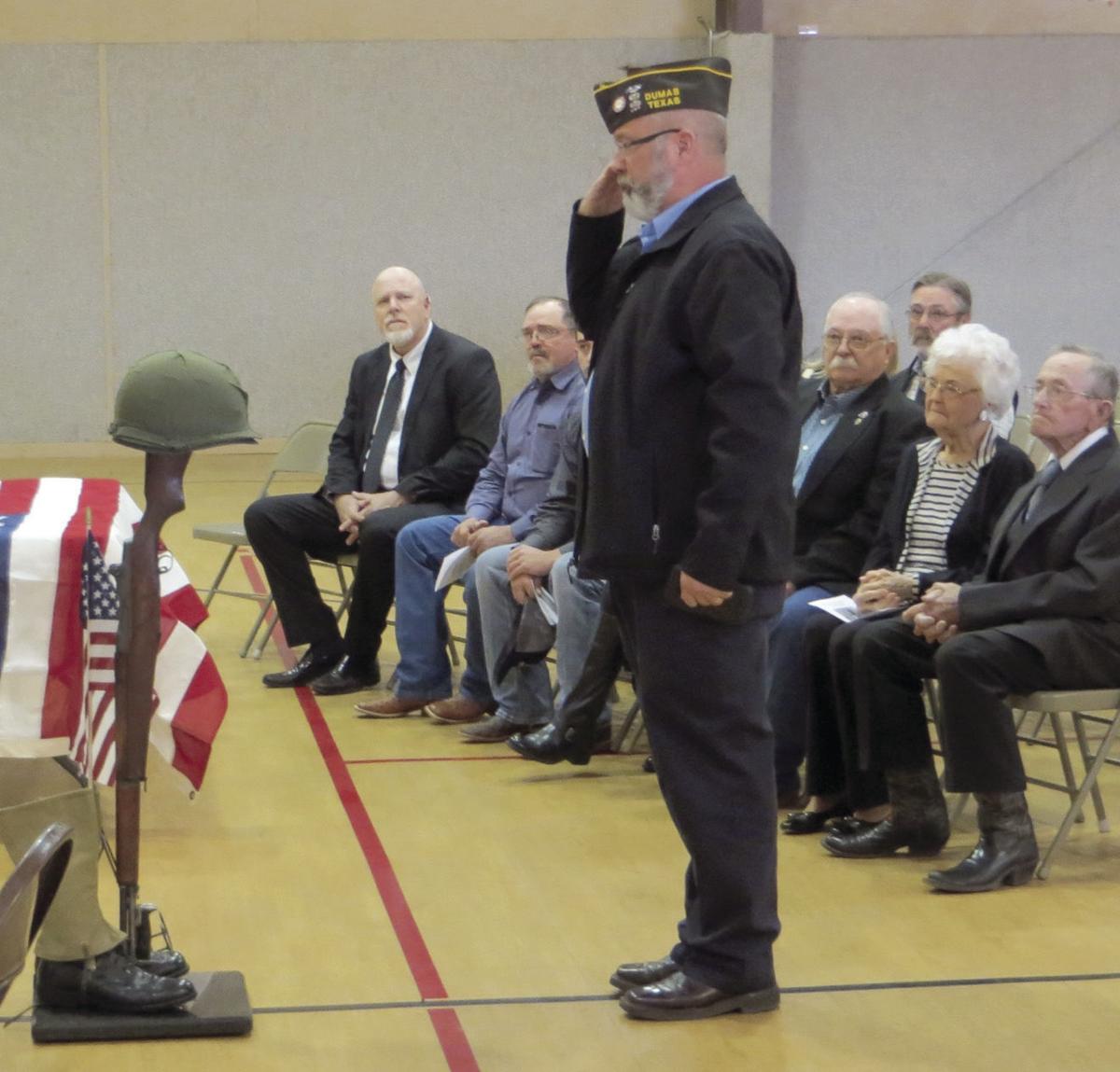 Kent Cartrite receives the flag that nomally would have covered the casket of his brother, SSG Harvey Lee Cartrite.  SSG Cartrite, missing in action since 1944, was memorialized Saturday in a ceremony in the Sunray Baptist Church.

Cartrite family members and family friends, together with members of the Dumas and Lubbock Veterans of Foreign Wars (VFW) posts and the Dumas American Legion post, gathered Saturday in the Family Life Center of the Sunray Baptist Church to honor the service and sacrifice of Staff Sergeant (SSG) Harvey Lee Cartrite, a World War II U.S. Army airman, who has been listed as missing in action since April 11, 1944.  "It is an honor and a privilege to be here," said Benny Guerrero, commander of Veterans of Foreign Wars Post 2466.  "It is many years after the fact, but we never forget."

In April of 1944, Cartrite was a ball turret gunner on a B17 with the U.S. Army's 8th Air Force flying missions from Horham, England to attack industrial targets in Germany.  He was on a mission to bomb a target in Rostock, Germany on April 11 when his plane, piloted by 2Lt  Eugene Schiappacasse, was struck by rocket fire from German fighter aircraft over the Baltic Sea.  According to reports filed by the crews of other aircraft on the mission, Cartrite and his fellow crew members, Schiappacasse, David Janofsky, Warren Messmer, Ralph Murray, Angelo Passero, Edward Phillips, Frank Saunders and Gerald Taylor, successfully bailed out of the damaged aircraft but perished in the frigid waters of the Baltic.  Two bodies were recovered by German fishermen.  Cartrite's body was not among them.  His body was never found, and he has been officially listed as missing in action ever since.  Cartrite and his missing crew mates are memorialized on the Tablet of the Missing at Cambridge American Cemetery in Cambridge England, according to the American Battle Monuments Commission.  Cartrite was awarded the Purple Heart and the Air Medal for "meritorious achievement while participating in aerial flight."  Technically listed as missing, Cartrite did not receive a memorial service after his plane went down.  All these years later, Kent Cartrite, Harvey's little brother, with help from family friend Billy Whitfield and Guerrero, set about to correct that and make sure the sacrifice of Harvey Lee Cartrite was not forgotten.

Kent Cartrite, a long-time farmer north of Sunray, has a special memory of the last time he saw his older brother.  Harvey was able to come home for three days just before shipping out for his duty station in England.  Harvey, the second born of nine children, was 23 years old.   Kent was "the baby." of the family,"   Before saying goodbye for the last time, Harvey gave his little brother a small crescent wrench.  Kent has been carrying and using that wrench ever since.  "I have had that for 75 years," he said Saturday as he pulled it out of his pocket and held it in his hands.

Kent says his brother did not want to be a farmer like others of his family.  "I guess he thought there were too many of them," he said.  "He worked at the carbon black plant here after he graduated."  Harvey also learned to fly.  He and another brother both went to Texhoma and successfully completed their solo flights.  When the war came, Harvey was eligible for the draft, but he volunteered to serve.  He wanted to be a pilot.  But his dream of being a military pilot ended when it turned out that he was color blind.  At that time, color blindness disqualified someone from military pilot training.

On Saturday, Harvey Lee Cartrite was remembered for his enormous sacrifice.  It didn't matter that he had died before most of the people in the room were born.  The veterans who performed the ceremony did so as though he had only died recently.  "If it weren't for men like SSG Cartrite, we wouldn't have the country and the freedoms we have today," said Guerrero, the first speaker.  There was a 21-gun salute, a bugler playing Taps, and other elements of ceremony performed on Saturday.  Though there was not a casket with a body, there was a draped flag that was folded and presented to Kent Cartrite.

Brother Ken Houston, pastor of the Sunray Baptist Church, delivered the eulogy, "May we never forget the sacrifice of Harvey and all those who served with him," he said.

Bobby Broxson is too young to have ever met Harvey Lee Cartrite, but he has known the Cartrite family since 1951he says. "I think it was great, a great honor for the family.  It was a great ceremony."

Whitfield, who played a critical role in making the ceremony a reality, said, "I am so thankful that Kent and them got that done."

"It was beautiful," said Beverly Brewer, who had to pause for a moment before she could speak.  "It was very emotional.  I have a son in the military."