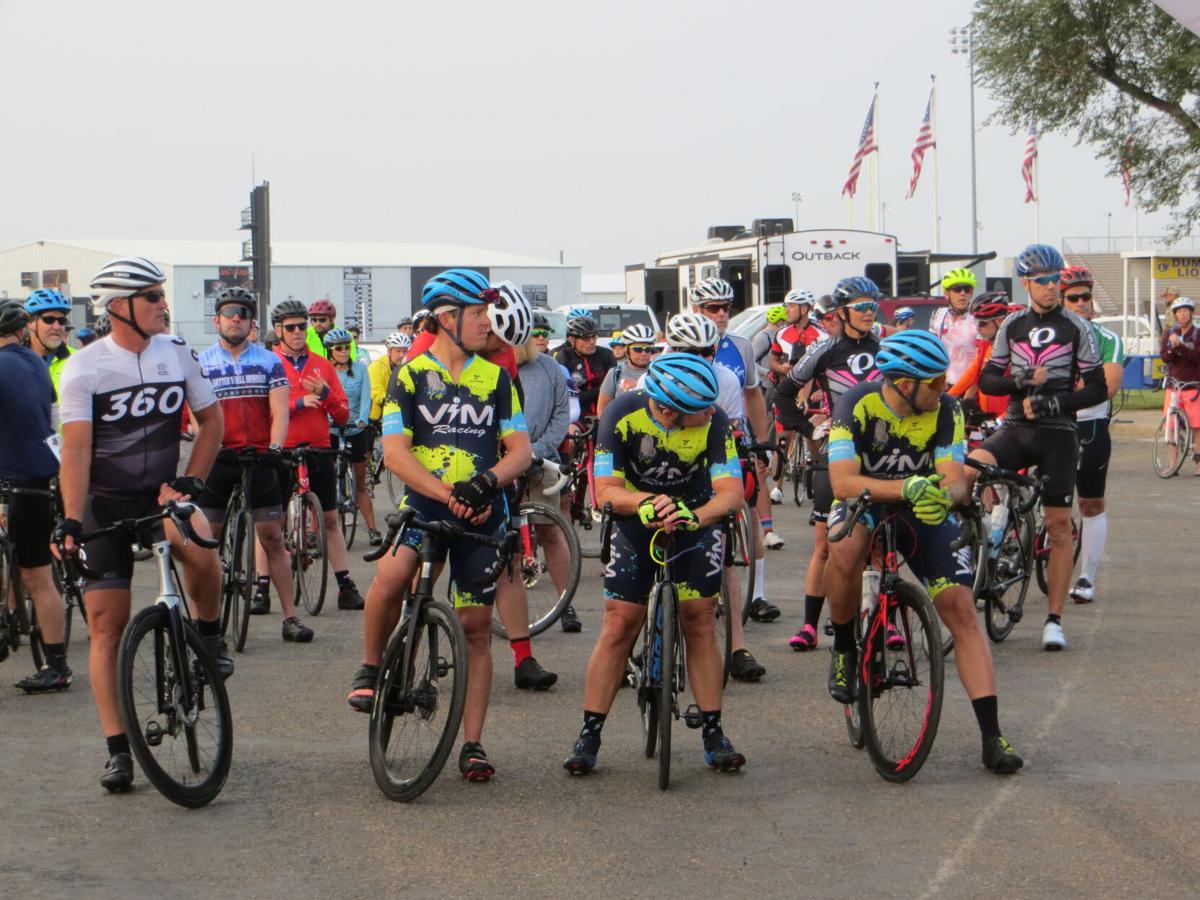 Riders wait at the starting line for the beginning of the Texas Tumbleweed 100. 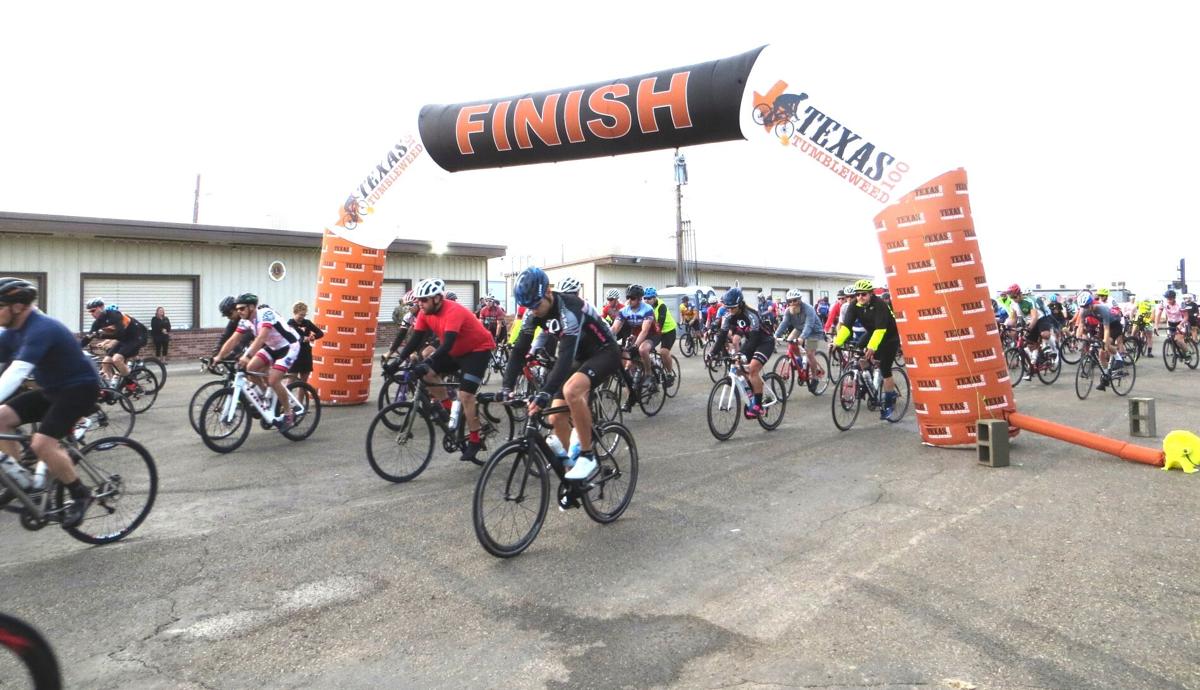 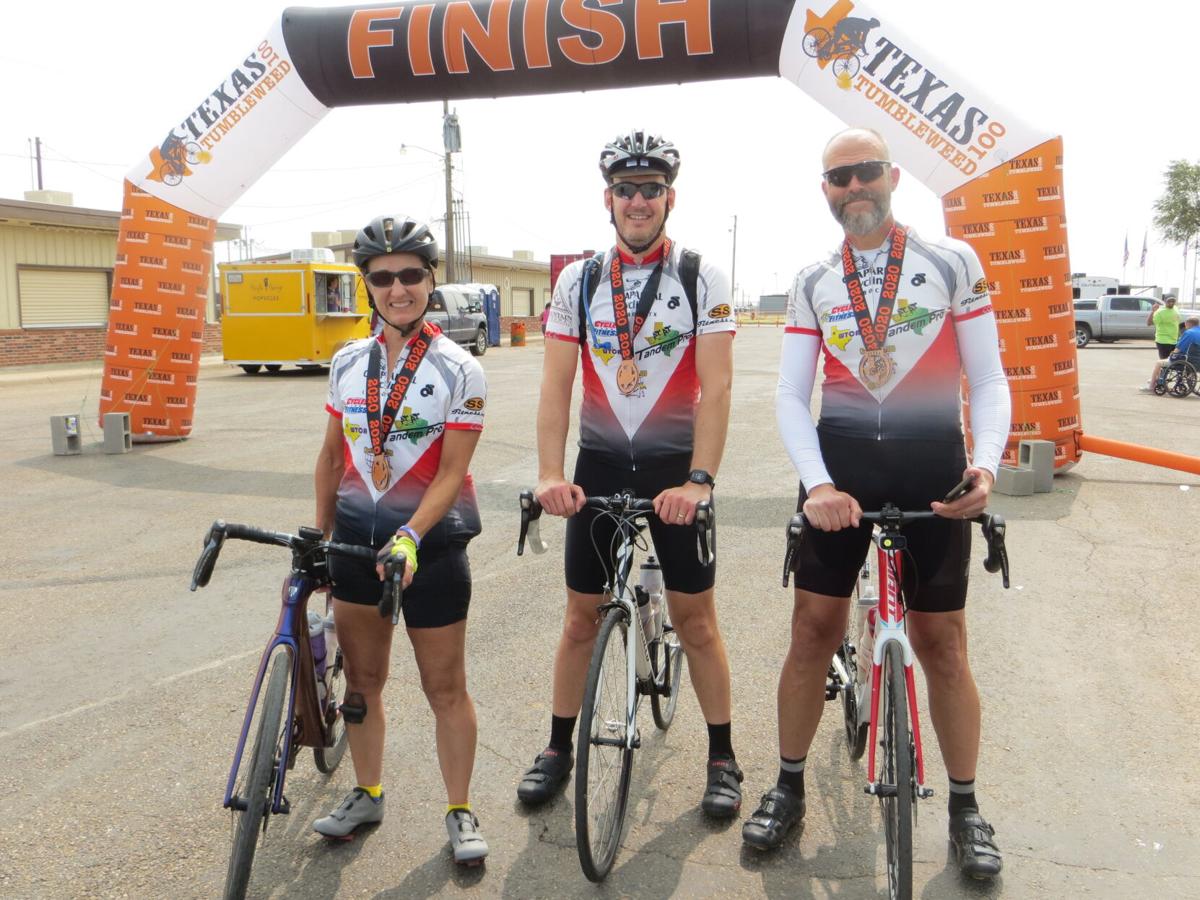 Left to right: Judy Fleming, Dell Purdy, and Sean Cudnoski of Lubbock after riding 100 miles during the 2020 Texas Tumbleweed 100.  Fleming was the first female to finish the 100 mile route Saturday.

Riders wait at the starting line for the beginning of the Texas Tumbleweed 100.

Left to right: Judy Fleming, Dell Purdy, and Sean Cudnoski of Lubbock after riding 100 miles during the 2020 Texas Tumbleweed 100.  Fleming was the first female to finish the 100 mile route Saturday.

In spite of the COVID crisis, or perhaps because of it, a record 148 people turned out Saturday to ride in the Texas Tumbleweed 100 and raise money for the Moore County YMCA.  "We were pleasantly surprised by how many came out despite COVID," said Susan Riseling, one of the chief organizers of the event.  "We were worried … but we just pressed on, acted like it wasn't there, and it worked."

YMCA Board President Harold Grall said it was too soon to know how much money had been raised, but he thought it would be more than previous years.  Because of the COVID crisis, they event this year had been trimmed down, so expenses were less.  Organizers were not certain until recently that the event would even go on.  Many similar events in the area had been cancelled, victims of COVID.

While the event in Dumas this year probably benefitted from so many other cancellations, people from the area and beyond seem to come year after year because they enjoy the event.    Judy Fleming of Lubbock, the first woman to complete the 100 Mile ride this year said, "It was great."  This was her second time to ride in Dumas.  She and her riding companions, Dell Purdy and Sean Cudnoski, also from Lubbock, say they ride every weekend.  They said they will be back.

One of the unique highlights of this year's event was the presence of one man on a unicycle.  He completed 35 miles, said Riseling.

Another man tried to run 35 miles, according to Danielle Arias, member of the Y board.   His bicycle was in need of repair, and he was a veteran of marathons and extreme marathons.  Arias did not know how far he got before being picked up.

The event got started at 8:00 am with all 148 riders lined up in McDade Park and ready to set out on 12, 35, 67.2, and 100 mile routes.  Members of the local Veterans of Foreign Wars and American Legion posts performed a posting of the colors ceremony while Grace Jester, an honor student at Dumas High School sang the national anthem.

Moore County YMCA Executive Director Shane Nelson was pleased by the way things turned out.  "The ride went great and benefitted our community beyond measure.  The impact it has on our organization and Moore County as a whole … something that isn't found in very many communities.  This county and its residents are truly a blessing to our organization."