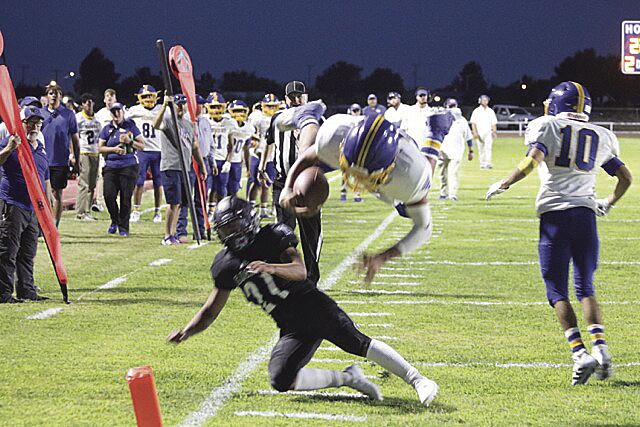 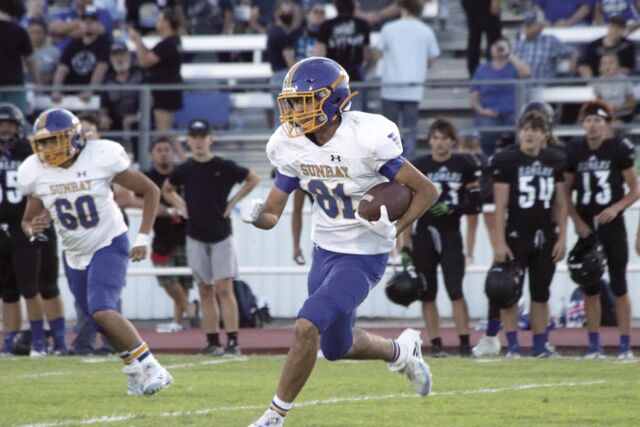 After falling behind 14-0 in the first quarter at Sanford-Fritch, the Sunray Bobcats varsity football team rallied to take a 30-22 win Friday night in the season opener for both teams.

Coach Wes Boatmun said, "We did well handling setbacks, staying patient, trusting one another and finding a way to win."

The Eagles got on the board with 7:53 to go in the first quarter off a two-yard touchdown run by Nate Hester. Trace Patterson scored on a 45-yard run moments later to give the Eagles at 14-0 advantage with 6:51 to go in the opening quarter.

Sunray pulled to within six with 2:55 to go in the second quarter when Samuel Mendoza scored on a four-yard touchdown run. Colton McDowell hauled in a pass from Armando Lujan for a successful two-point conversion.

Not to be outdone, the Eagles stretched their lead back to 14 in the final moments of the second half as Joel Watson threw a 58-yard strike to Patterson. Watson converted the two-point play for a 22-8 Eagles lead at the intermission.

The second half was all Sunray.

The Bobcats came out and scored with 3:58 to go in the third quarter to pull to within eight, 22-14, off a one-yard run by Mendoza. The Bobcats defense recorded a safety a couple of minutes later to cut the lead to six, 22-16.

A strong fourth quarter proved to be the difference in the game as Sunray post 14 unanswered points in the quarter to earn the 30-22 win. The first score came off of a three-yard run by Mendoza with 10:49 to go. Then, with 2:28 remaining on the clock, Lujan connected with Jimmy Dominguez for a 15-yard strike.

Lujan finished the night 12-for-23 passing for 122 yards and a score. Mendoza carried the ball 13 times for 61 yards and three touchdowns. The Bobcats had 173 rushing yards and 122 passing yards for a combined 295 yards of total offense. Sanford-Fritch was held to 58 yards passing and 278 yards rushing for a total of 336 yards.

Coach Boatmun said there are things his team can improve upon.

"We need better execution," he said. "(There were) too many snaps with eight or nine guys doing good work while two or three (made) small mistakes. We don't have big issues, but three small mistakes in a play can equal one big one." He also said he wants to see all 11 players doing what they're supposed to do more often.

Sunray will see their first home action of the season on Sept. 3 when they play host to the Hooker Bulldogs. Kickoff is set for 7 p.m. at Bobcat Stadium.