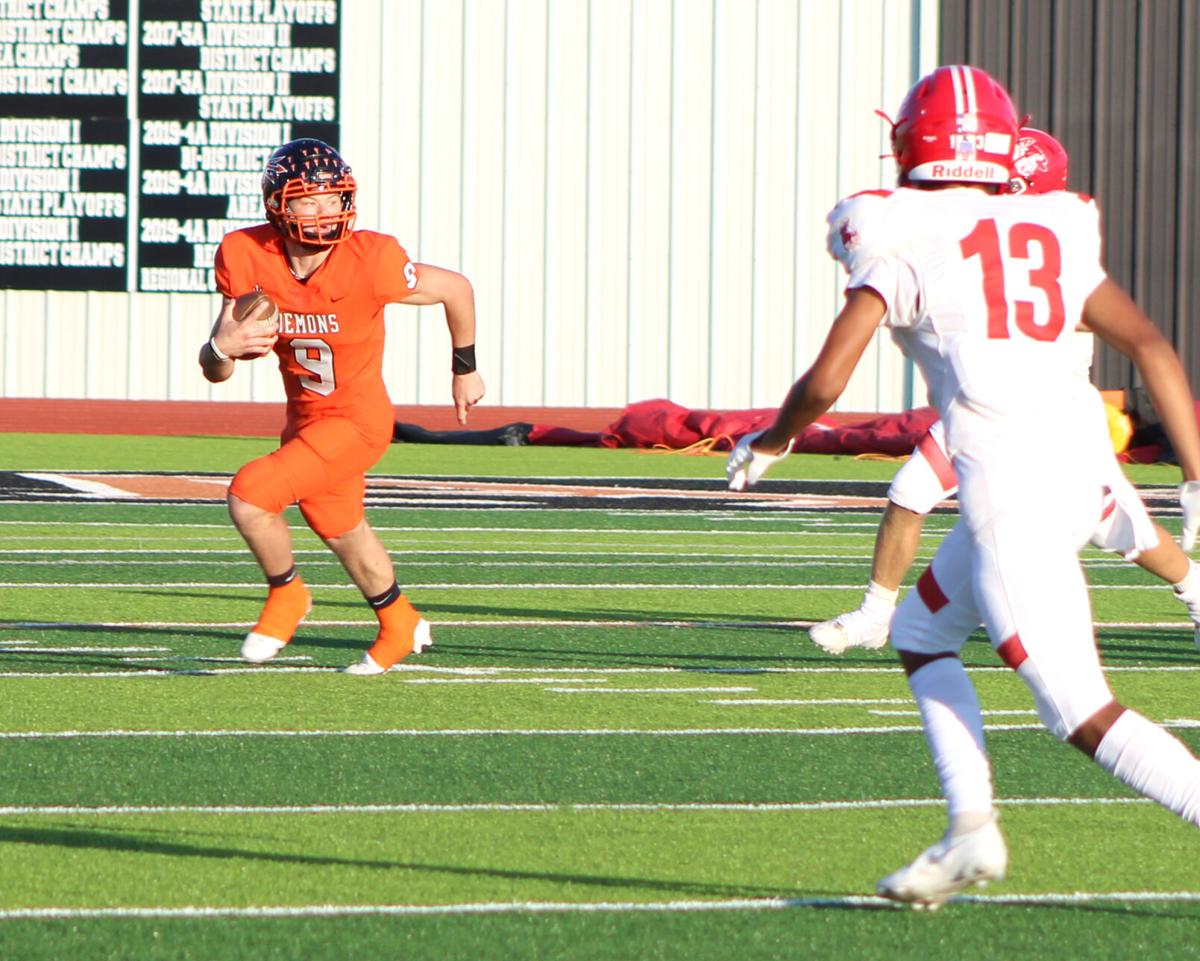 Spencer Williams begins to scramble as the Perryton defense covers up downfield possibilities. 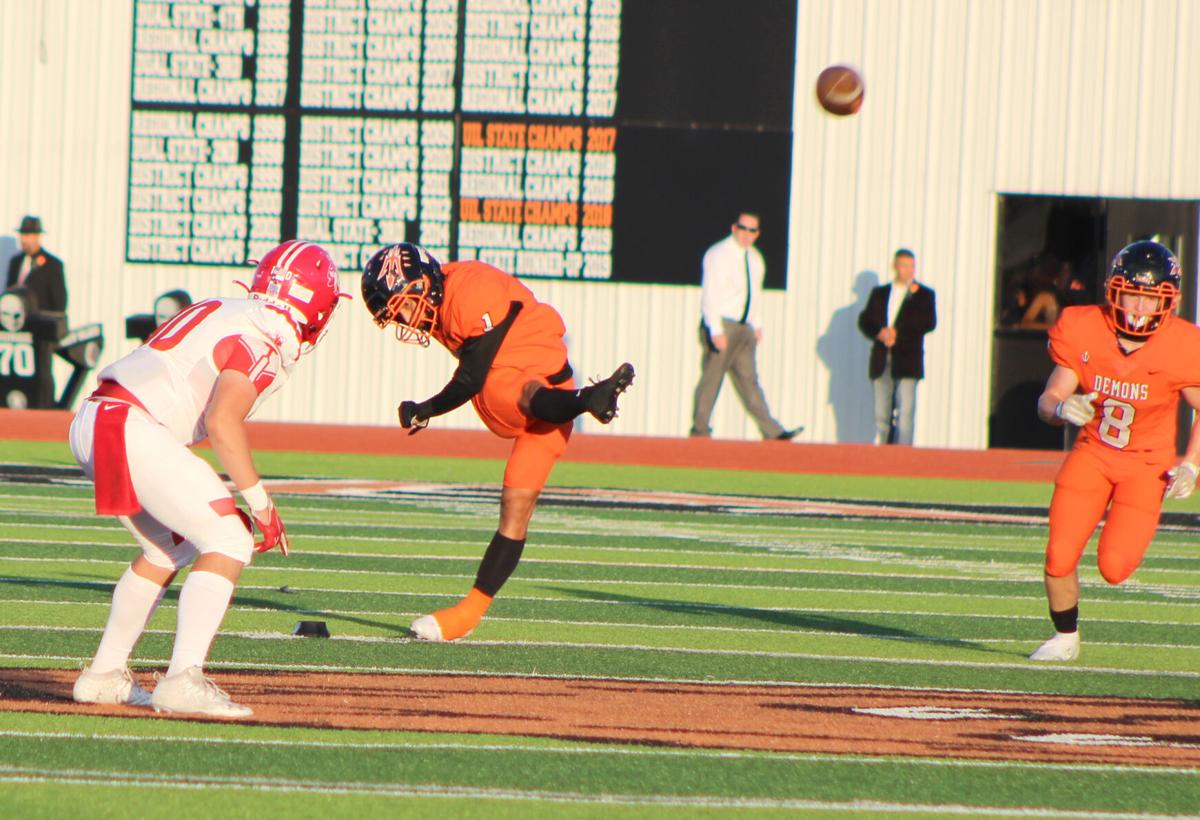 Ah Lee Yart puts his leg into a kickoff in Friday night's contest with the Perryton Rangers. Dumas won 30-0. 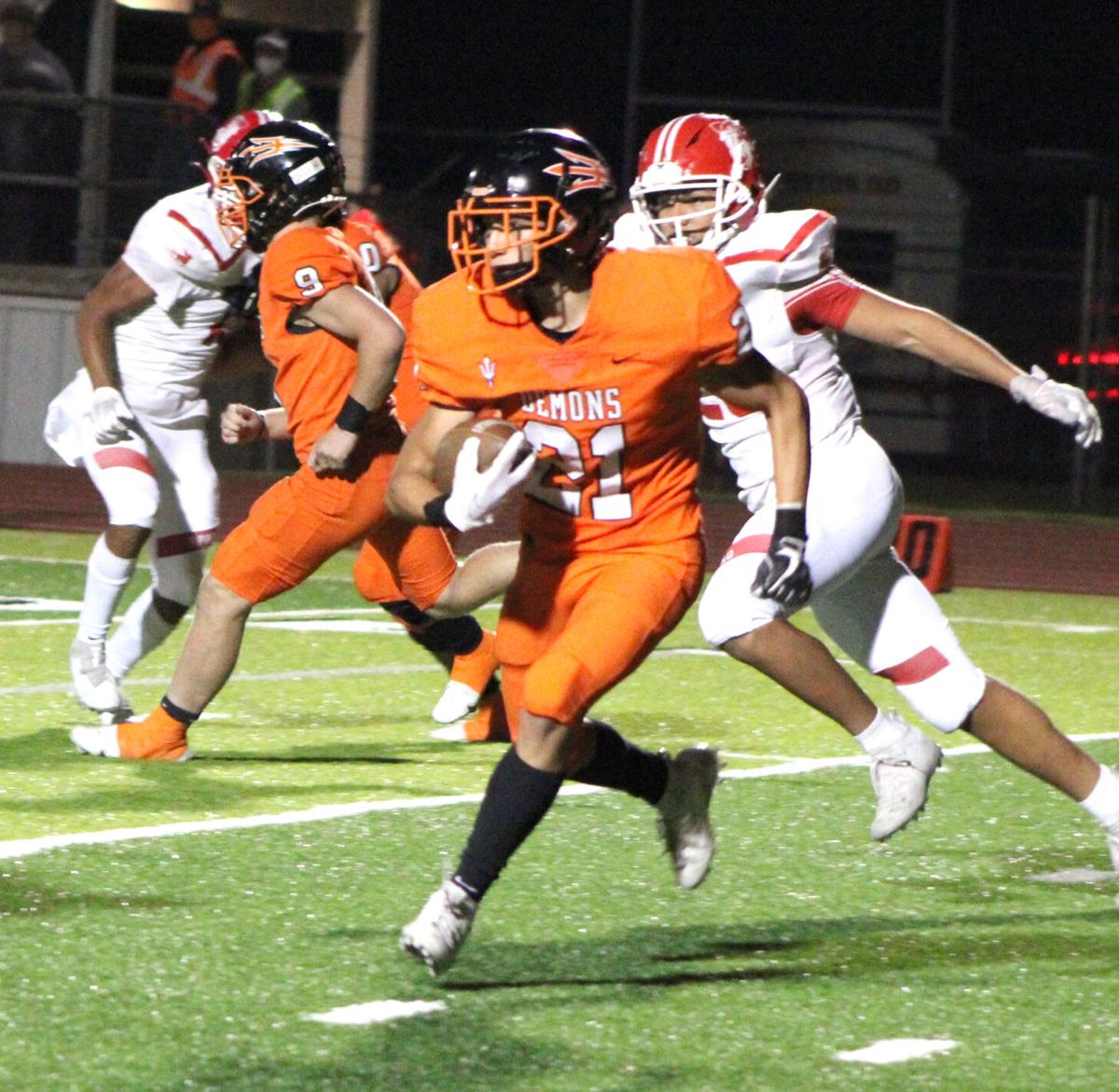 Juan Romero rushes the ball in the contest Friday night. He picked up 32 yards on three carries. 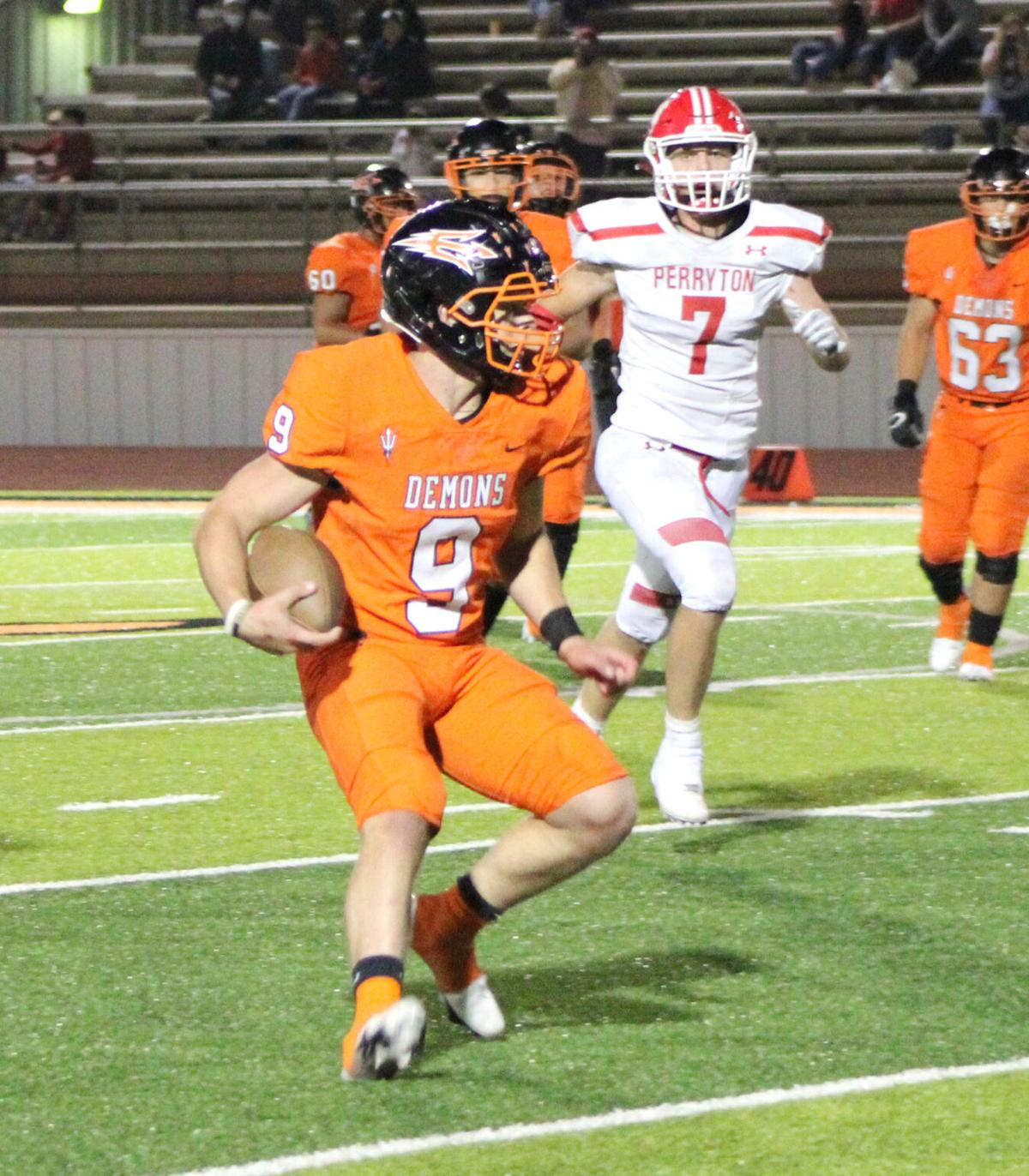 Spencer Williams uses his legs to advance the ball on this play. He ran the ball 14 times and picked up 87 yards and two scores for the Demons. 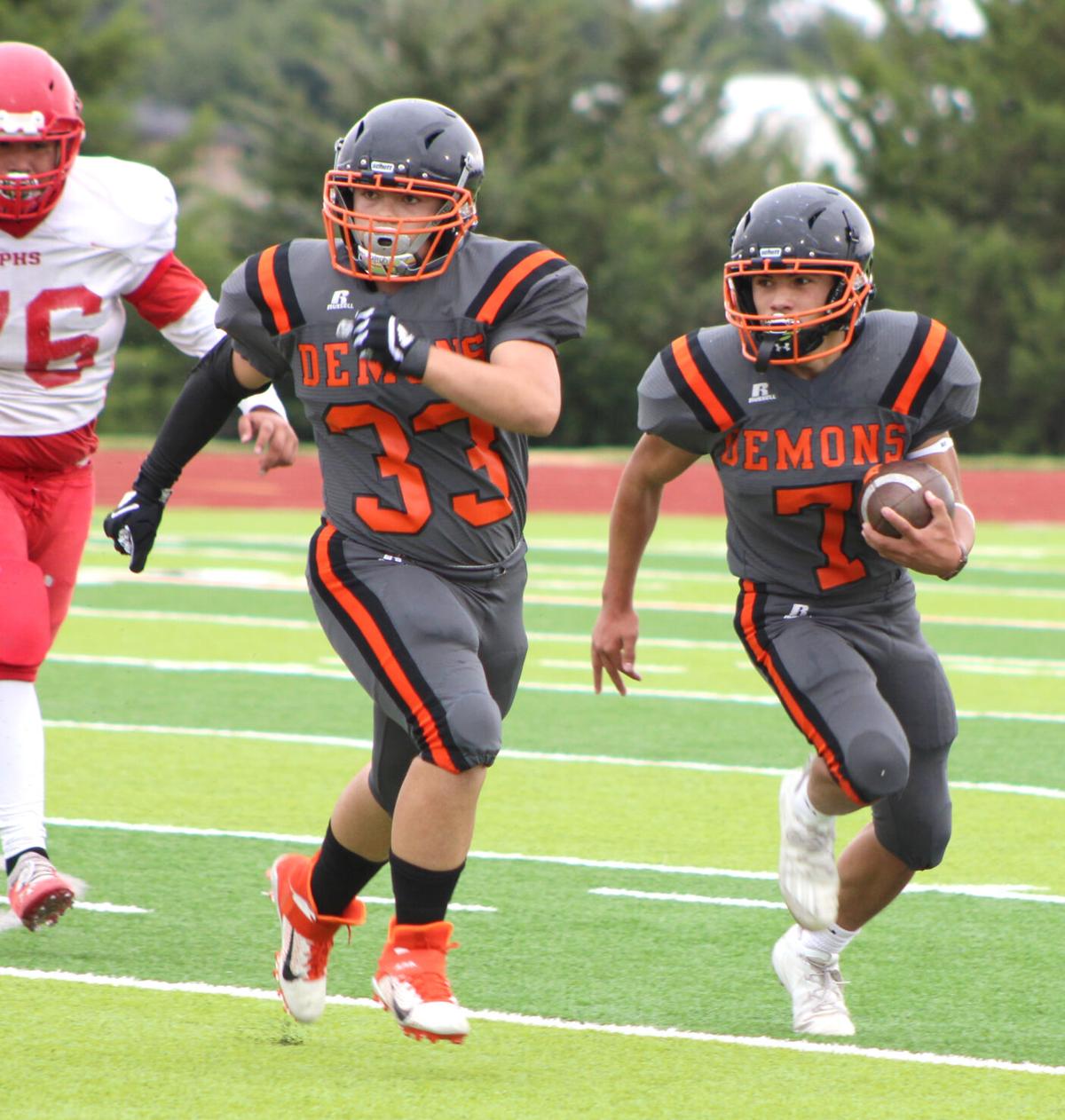 The JV also posted a shutout on Thursday, Sept. 10, against the Perryton Rangers, 27-0. 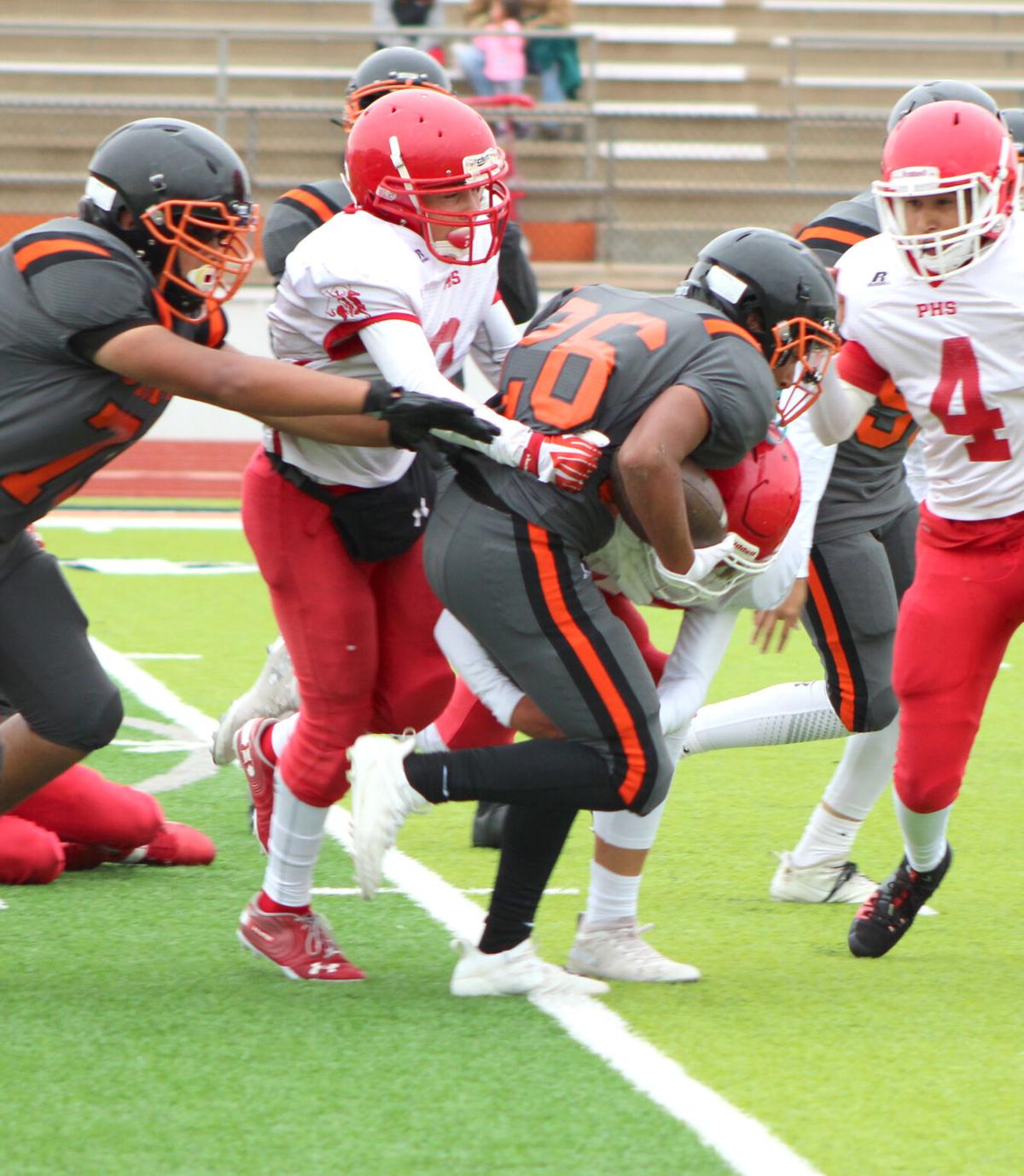 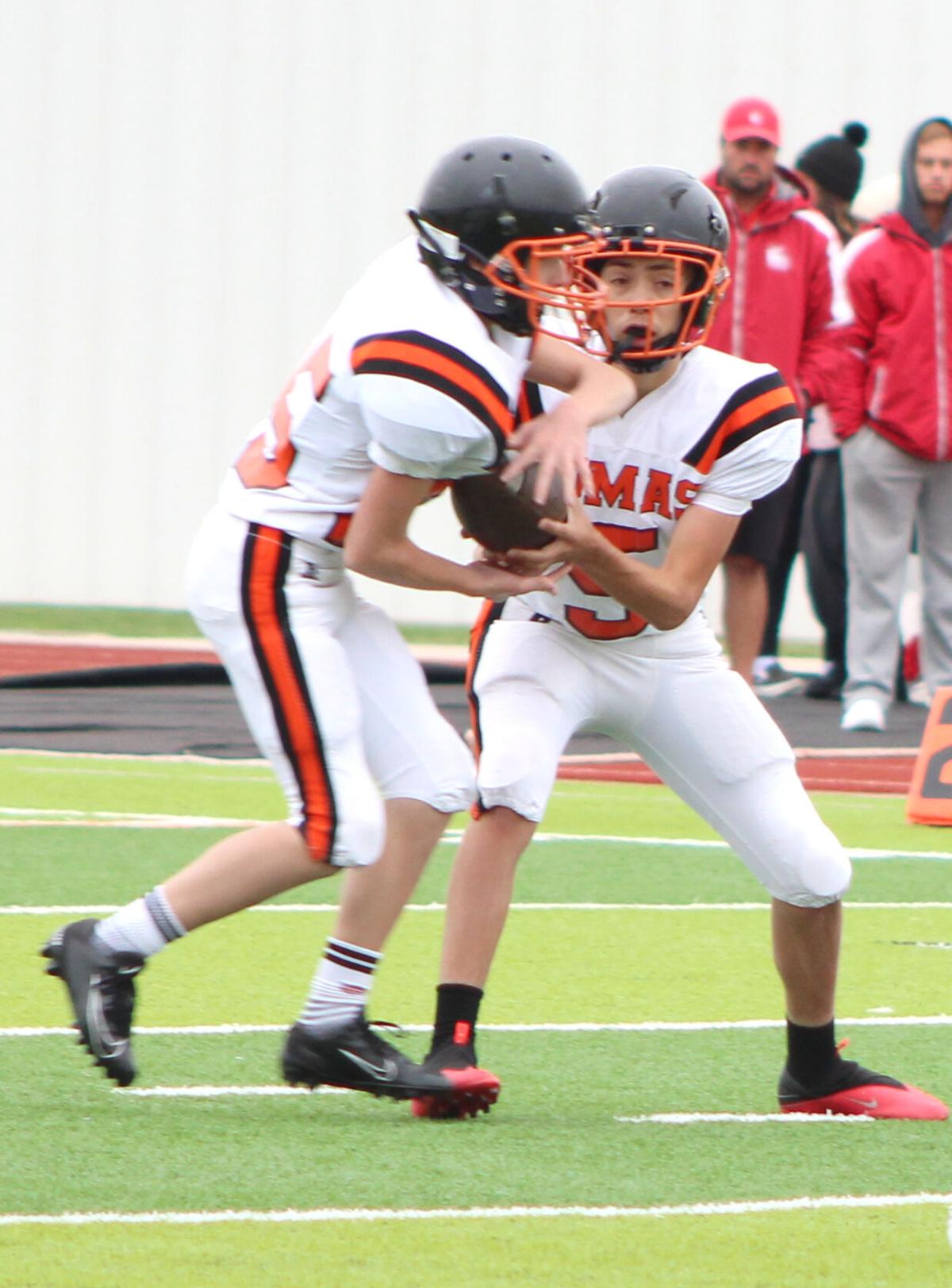 The freshman Orange team hosted the Stratford Elks JV and lost by a score of 46-0, while the Black team visited Perryton and won 28-0. 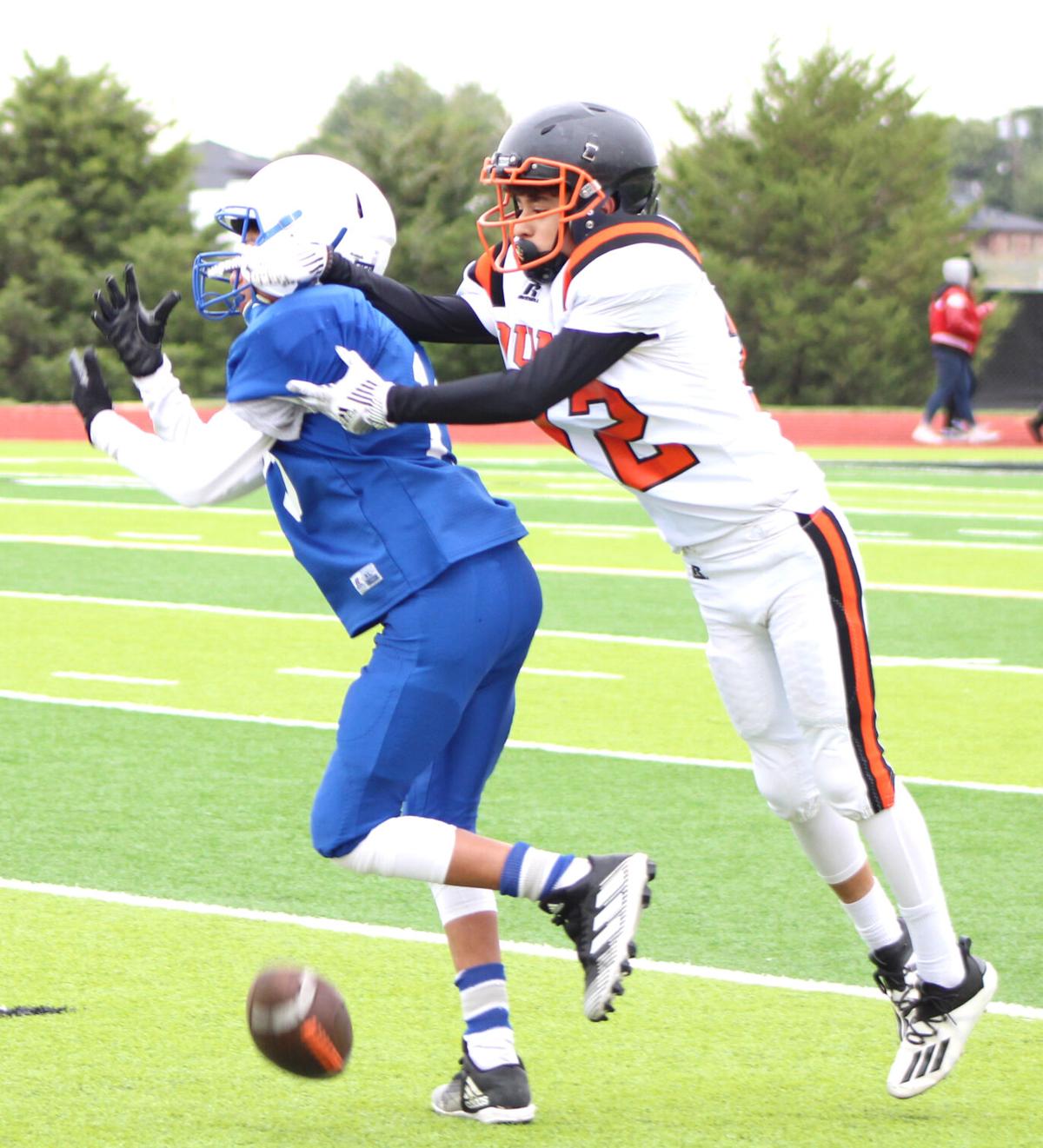 Spencer Williams begins to scramble as the Perryton defense covers up downfield possibilities.

Ah Lee Yart puts his leg into a kickoff in Friday night's contest with the Perryton Rangers. Dumas won 30-0.

Juan Romero rushes the ball in the contest Friday night. He picked up 32 yards on three carries.

Spencer Williams uses his legs to advance the ball on this play. He ran the ball 14 times and picked up 87 yards and two scores for the Demons.

The JV also posted a shutout on Thursday, Sept. 10, against the Perryton Rangers, 27-0.

The freshman Orange team hosted the Stratford Elks JV and lost by a score of 46-0, while the Black team visited Perryton and won 28-0.

The Dumas Demons hosted the Perryton Rangers on Friday night, Sept. 11, for Homecoming. It appeared the Demons started slow, but soon picked up momentum and started firing on all phases of the game on their way to a 30-0 victory over the Rangers.

The Demons received the ball first, but were unable to effectively move the chains and had to punt the ball on their first possession. Fortunately, with 7:11 on the clock in the first, Dumas forced a fumble and Dallan Dill recovered the ball on the 50-yard line. From there, the Demons moved downfield but could not punch it in. Dumas settled for a 28-yard field goal by Ah Lee Yart.

Spencer Williams ran in for another score from six yards out early in the second quarter. Yart tacked on an extra point and the Demons were on top 10-0 with 10:26 to go. Another couple of touchdowns in the second, and a 17-yard touchdown pass from Williams to Victor Chavez in the third put the Demons up 30-0.

That was the final from Demon Stadium Friday night as the Demons shut down the Rangers' offense and outlasted their defense.

Williams was 16-of-25 for 179 yards and two touchdowns with one interception. He also rushed for 87 yards on 14 carries and two scores.

Behind Williams, Juan Romero picked up 32 yards on three carries and Bryan Mendoza had 22 yards on five carries. Other rushing leaders were James Bednorz, who carried six times for 17 yards; Louis Ortiz with nine yards on one carry and Zytavious Torres touched the ball four times for three yards.

Mendoza picked up 10 yards on two receptions and Josh Flores caught a pass for nine yards.

Dill led things defensively with 5.5 tackles, while Diego Falcon had 4.5. Cannon Speck and Cade Cox each had 3.5 tackles. Emmanuel Ibanez came in with 2.5 tackles. Uriel Adalva, Roberto Ruiz, Brayden Boggs-Rushing, Ortiz and Yart each had two tackles in the game. Also contributing defensively were Jacob Pinales, Christian Carrera and Damion Murga with one tackle each, while Torres had half a tackle.

Yart was good for a field goal and 3-of-4 extra points. He also punted once for 37 yards. Ibanez had two punts in the game for 99 yards, and also had one kick return for 14 yards.

Saints ready for historic MNF game, with or without Thomas

Mizzou Arena to be used as polling place for 2020 election

Head coach Aaron Dunnam told his players after the game he was proud of them, despite some miscues and mistakes in the game.

"Proud of the win. (I'm) never going to not be proud of a win. Proud of you all. Proud of what we're doing because we're 3-0. And that is the biggest deal," he said.

He continued to talk about the process, as he did last year. All the things they are working on in practice, watching game film and executing on the field during live games are the same ideas and principles of which get them from game to game.

"Everybody's trying to win. We're doing the same," he said. "... Just excited to be where we're at. We're 3-0. There's a lot of teams in the state of Texas that aren't that, but we are. And we'll look at what we did tonight and then we'll get ready for Levelland coming up next week here."

He spoke highly again of Williams and his decision-making and play-making abilities.

"He's the leader of our team," Dunnam said. "He's a high-character kid on and off the field at all times."

Emmanuel Ibanez is a young player that has made some plays so far this season and he did again Friday night. After what looked like a minor injury to Yart, Ibanez stepped in and punted for the Demons.

"... He's done a really good job. He had to come in for us at the end of the game and punt for us, and punted really well," Dunnam said. "He starts for us at corner. He's a sophomore kid that we had really high expectations for as he came in and he's continued to really impress us week in and week out. And he's playing some really good football right now."

Another young player stepping up so far this year has been Juan Romero. Dunnam said he has worked hard in the offseason and believes he is being rewarded for his work ethic.

He appears to be a favorite target of Williams as he has caught 15 passes for 296 yards through three games.

The next matchup for the Demons will be another home contest Friday, Sept. 18, as the Levelland Lobos come to town for a 7 p.m. kickoff.