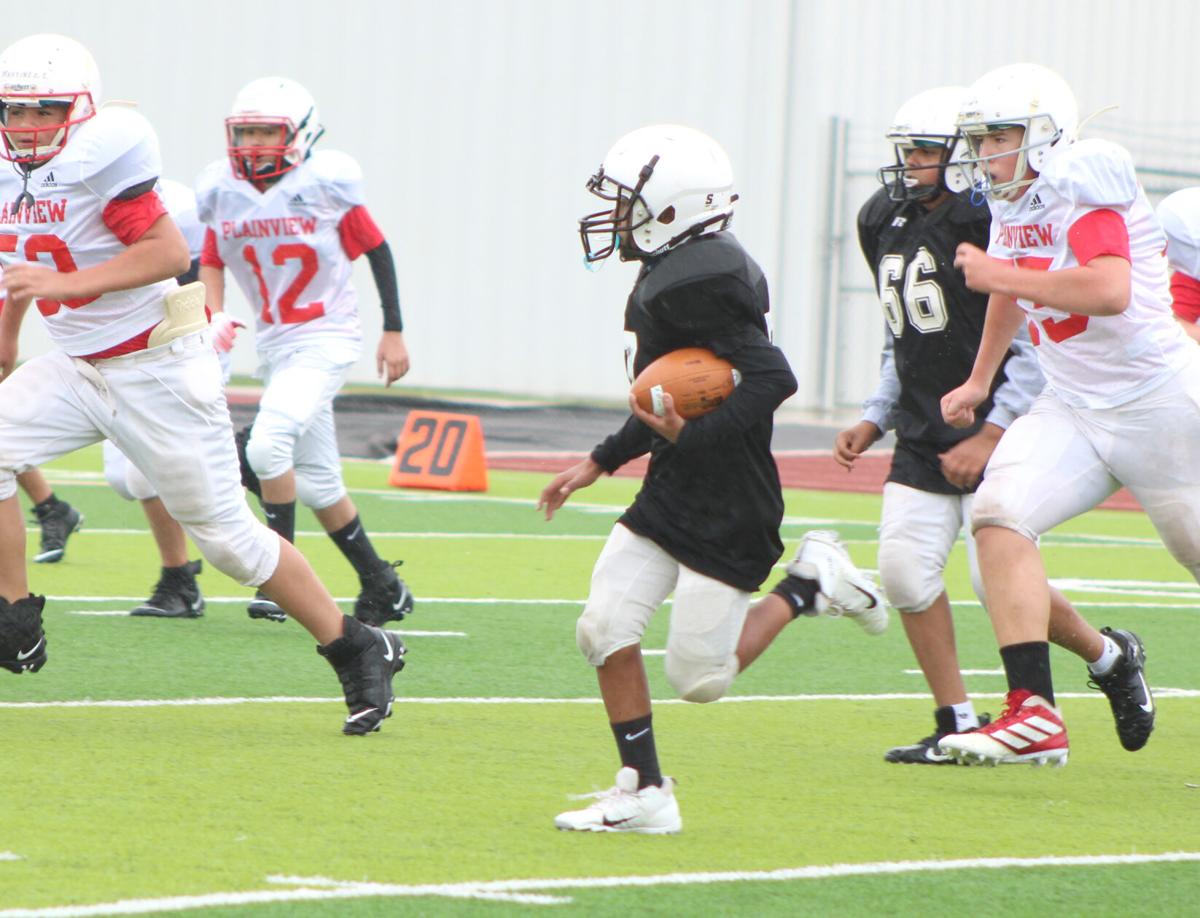 The seventh grade Black team dominated with a 48-0 victory over Coronado. 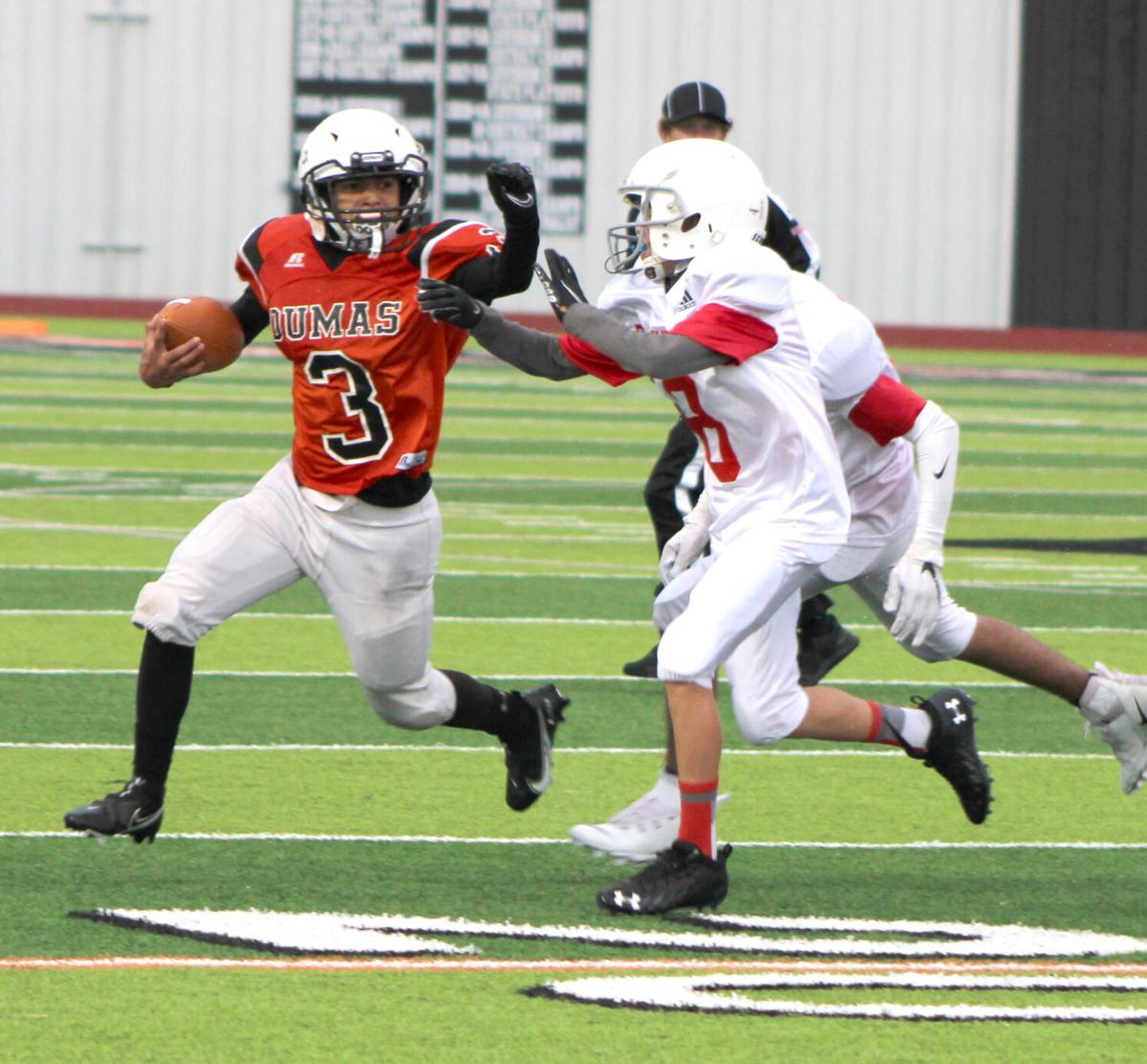 The seventh grade Orange team followed the Black team with a strong performance of their own, as they also shut out Coronado 42-0.

The seventh grade Black team dominated with a 48-0 victory over Coronado.

The seventh grade Orange team followed the Black team with a strong performance of their own, as they also shut out Coronado 42-0.

The Orange Team won 8-6 a defensive battle versus Coronado on Tuesday, Sept. 8, while the Black Team easily won 38-14.

Dumas scored on their first play of the game on a quarterback scramble by Lorenzo Ibarra. After that, the Orange team's offense struggled to hold onto the ball but the defense was able to shut down Coronado's offense. The team was led by James Coaly who had four tackles and one interception and Tiden Temple who wrecked havoc in the middle.

The Black Team picked up scores from Zephania Garcia, Kennon Walker, Edward Martinez, and Ceasr Rameriez, who scored on a fumble return. On defense, the Black Team was led by Julin Ortiz, who had one interception and four tackles and Xzavin Sartian who had six tackles.

The eighth grade will host Canyon on Tuesday, Sept. 15.

On Tuesday, Sept. 8, the seventh grade football Demons took on Plainview Coronado Junior High at Demon Stadium. Both the Orange and Black teams came out with victories.

Moos on the radio: Big challenge to get logistics sorted out; Huskers, Iowa want to play Black Friday

Despite strong offensive start, Packers know drops have resulted in ‘a lot of yards left out on the field’

The Orange team won 42-0. Getting in for touchdowns were running backs Shine Sopya and Adam Velasquez,  and quarterback Briggs Satterfield also ran one in. They were successful behind the offensive line made up of Cody Austin, Cameron Cox, Drew Garcia, Cristian Anguiano, Antonio Espino, Ethan Tobias, and Javier Pena. The Demons also scored on special teams with a kickoff return by Jayden Gutierrez.

On the defensive side of the ball, the junior high teams had another strong showing Tuesday. While fighting the bitter cold windy day, both Orange and Black teams rallied behind a dominant defensive line to shut out each Plainview team, not giving up a single point.

For the Black team, the Torres brothers racked up six sacks between the two, and Omar Torres with a defensive touchdown on a fumble scoop and score. Rayce Thornburg, Alejandro Lugo and Leonardo Gallegos cleaned up anything that got by the steel wall of the defensive line and tallied multiple tackles each, concluding without giving up a single first down.

The Orange team defensive dominance was also exemplified by the defensive line. With a combination of Tate Defries, Cameron Cox, Chris Jimenez, the Plainview offense did not stand a chance running the football. Cox and Jimenez each tallied five tackles for a loss. When the ground game was shut down, Plainview turned towards the air attack. Due to pass break ups from Satterfield and Sopya, the Plainview passing game met the same result as the ground game. Anything that got by our dominant three-front was quickly shut down by linebackers Zyeer Garcia, Adam Velasquez, Juan Corona, and Daniel Acosta. The boys held Plainview to zero points, and not a single first down.

Next up will be a road contest for the seventh-graders with Canyon on Tuesday, Sept. 15.